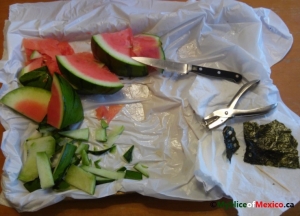 After carving my logo, I was left with a bunch of scraps and little pieces of watermelon on my work tray, and some seaweed. I munched on the seaweed, while thinking what to do with the leftover fruit. Almost immediately, I thought of a watermelon smoothie, which in Mexico is often included as a menu item in small restaurants specializing in tortas y licuados (Mexican sandwiches and smoothies).  The sandwiches are prepared on the grill to order: ham and cheese, pork loin roast, chorizo sausage, etc., and served hot with a cold fresh fruit smoothie. When I was in middle school in Mexico City, a friend introduced me to one of these restaurants, “Tortas Don Polo”, which was (and still is) very popular, and remained my favourite place to grab a snack for many years … Now I had to make some tortas calientes (Hot Mexican Sandwiches) to go with the smoothie!  While gathering ingredients from the fridge, by free association of ideas, I started reciting the following poem:

This is the only poem I can recite by heart; it got imprinted in my memory around the same time I started going to “Don Polo.” At my middle school, the day began at 7:20 am, and I remember feeling grumpy on Sunday evenings, dreading the prospect of waking up the next day at 6 am to get ready for school.  I would be lying in bed listening to the radio, when the government sponsored show “La hora nacional” (“The National Hour”) would kick in – as it still does – at exactly 10 pm, broadcasting over all radio frequencies; that was my cue to turn it off and get some sleep.  I would, however, catch the first few minutes of the transmission, a pre-recorded segment that was oftentimes repeated for a number of Sundays; one of them was that short poem, which became my lullaby at the dreaded end of the weekend.  The radio host would continue with a brief introduction of the author, which I am paraphrasing, in English: “José Juan Tablada, born on April 3, 1871, who died on August 2, 1945, is the poet recognized as the pioneer of Haiku in Mexico, with the publications of his two books “Un día” (“One Day”) in 1919, and “El jarro de flores” (“The Vase of Flowers”) in 1922 …”; the latter includes my middle school lullaby “Sandía” (“Watermelon”). Haiku is, curiously enough, a Japanese form of short poetry. “La hora nacional” (or “Mexico’s Hour” as I remember calling it) has been on the air since 1937, and I might try to listen to a show one of these days because, even as a grumpy teenager, it caught my imagination at least that one time. I thought it was so clever to describe colour, time and sensations with a rich allegory of just a short string of words; it kept in my memory and sure helped me fall asleep in a better mood.

There was some cantaloupe in the fridge as well, so I made another smoothie – for my husband – and I had some buns and leftovers from food I was prepping for other posts, so I ended up with a good spread to serve for supper:

For my recipes, go to Tortas calientes (Hot Mexican Sandwiches) and Licuado de sandía (Mexican Watermelon Smoothie).  The cantaulope smoothie (or any other fruit) is prepared the same way, just substituting the alternative fruit for the watermelon.

3 thoughts on “Supper for Two and a Short Poem”