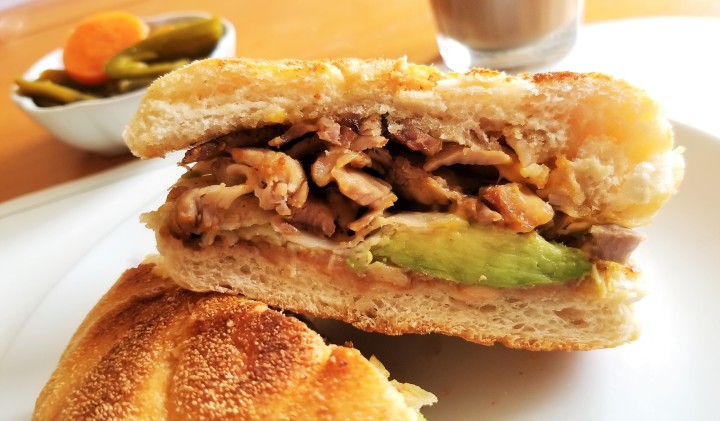 In one of my earliest posts, I mentioned that when I was in middle school in Mexico City, a friend introduced me to “Tortas Don Polo”, a restaurant specializing in Mexican sandwiches (tortas) and smoothies (licuados). Established in 1958 by Leopoldo (Polo) Sánchez Preciado, it became very popular, especially for its delicious “tortas cubanas” (Cuban tortas.) In yet another of my early posts, I wrote about the three urban legends regarding the naming of this sandwich:  “We know tortas are Mexican sandwiches, and it is generally accepted that the cubanas in particular, were invented in Mexico City sometime in the 1950s (note: the Cuban sandwich is a different preparation, popular in Miami); how they were named is a different matter.  The three most popular stories are: 1) That the creator had a small torta stand on “República de Cuba” Street, in Downtown Mexico City, so the sandwich was named after the location. 2) That Mexican men described Cuban ladies as “having everything”: elegance, beauty and intelligence; the curious analogy is – remember, this is the 1950s – that tortas cubanas are filled with lots of ingredients: meats, cheese, veggies, or “everything on.” 3) The last story, closer to a fairy tale, is that Fidel Castro himself invented this Mexican sandwich  in a restaurant in Downtown Mexico City during his brief exile in the country (1955-1956), and it was named cubana after his homeland.”  There is no consensus to this date on which story (if any) is right.

I recently had a chance to go back to the original “Don Polo” (which now has branches, but the original is on 86-A Félix Cuevas/Eje 7, Del Valle). I felt transported through a time gap, it looked just as I remembered it was in the last Millennium (hehe).  The nice servers were still wearing uniforms with white aprons and, as soon as you seat at one of their square tables, they promptly arrange a paper placemat on the melamine top, as well as a laminated menu with photographs of some of their specialties:

Of course the chairs and stools had those old-fashioned vinyl seats, I mean, just look at the precious coffee machine on the counter: 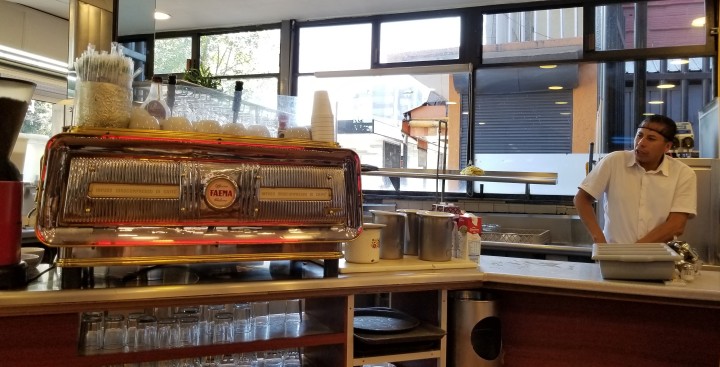 That sight, and the sound and smell of fresh coffee brewing in the background (not sure if from the same machine, but still) felt like a balm to my senses … I looked at the menu just for the memories, but I knew I was going to order a torta cubana. I also ordered a licuado (smoothie), and they came along with a saucer filled with their homemade escabeche-style pickled jalapeño peppers and carrots:

It was just as I remembered it; buttered crusty bun, grilled and filled with layers of refried beans, avocado, ham, American style yellow cheese and a pile of their house pork roast. I added a generous amount of spicy vegetables to my torta cubana:

Needless to say, I thought that, once back home, I had to recreate the experience.

Ingredients (for one sandwich)

Slice bun in half, lengthwise; spread butter on the cut side of both halves; place on a skillet, pre-heated over medium heat, butter side down, along with the pork and ham photo below, left); stir pork and flip ham after a couple of minutes, then place cheese on top of the ham and lightly butter the outer sides of the bun (photo below, right):

When the cheese starts to melt, flip along with the ham on top of the roast, flip buns to crisp the outer sides, and spread beans on bottom half of the bun (phot below, left).  After one more minute, place meats and cheese on the top half of the bun; transfer bottom half to a plate, bean side up, and top with avocado slices, then place the other half on top (photo below, right):

Serve with the jalapeño peppers and carrots en escabeche on the side, to add to the sandwich to taste: 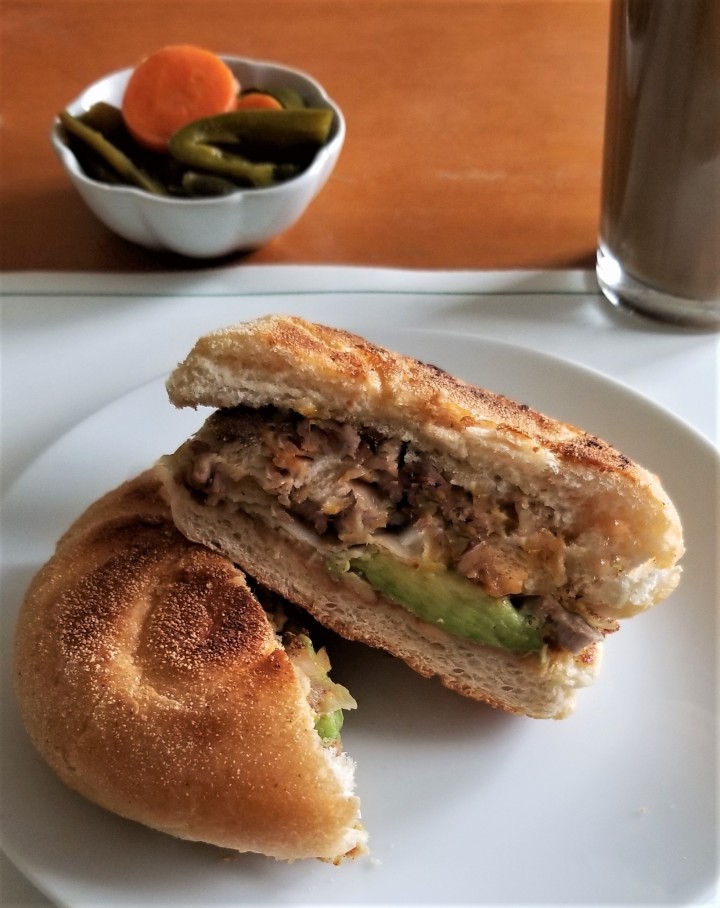 I even made a licuado (click here for my recipe).  Overall, the meal was very close to the one at “Don Polo”, except for the bun; I used a Kaiser bun because the authentic teleras are not available around here; the closest, I think, is the Portuguese style crusty bun, so with a little perseverance, maybe I will find it next time, and get even closer to the one and only Don Polo’s torta cubana.

I am joining Tummy Tuesday with Mary @ Cactus Catz