There are many foods and dishes named after geographical locations, and some are very famous for their protected designation of origin, such as Champagne wine or Parmigiano-Reggiano cheese. In other cases, products are attached to places arbitrarily, or based on anecdotal information that sometimes becomes legend.  There are many such foods in Mexico for both cases, for example, milanesa does come from a breaded cutlet dish from Milan (photo, with side of raw veggies and Russian salad) but, are tortas cubanas (Cuban tortas), cacahuates japoneses (Japanese peanuts), and ensalada rusa (Russian salad),   from Cuba, Japan and Russia, or are they Mexican creations with exotic legends?

We know tortas are Mexican sandwiches, and it is generally accepted that the cubanas in particular, were invented in Mexico City sometime in the 1950s (note: the Cuban sandwich is a different preparation, popular in Miami); how they were named is a different matter.  The three most popular stories are: 1) That the creator had a small torta stand on “República de Cuba” Street, in Downtown Mexico City.  2) That Mexican men described Cuban ladies as “having everything”: elegance, beauty and intelligence; the curious analogy is – remember, this is the 1950s – that tortas cubanas are filled with lots of ingredients: meats, cheese, veggies, or “everything on.”  3) The last story is that Fidel Castro himself invented this Mexican sandwich [1] in a restaurant in Downtown Mexico City during his brief exile in the country (1955-1956), and was named cubana after him.  Conclusion: The only fact known for certain is that tortas cubanas were created in Mexico.

Cacahuates japoneses are a snack of roasted peanuts coated with a thin and smooth layer flavoured with soy sauce.  A Japanese man and his Mexican wife developed the snack in Mexico City, based on a Japanese formula, but with a different technique, which produces a smooth, and thinner coat than the original; the soy sauce flavour, which was a novelty in Mexico back then (late 1940s, early 50s), gave the snack its Japanese denomination.  Armando Nakatani, one of the couple’s sons, continued taking care of the family business, while two of his brothers became famous artists (Carlos Nakatani was an acclaimed painter, and Yoshio is a great singer).  I read all this information in an interview – in Spanish [2] – with the singer, and my mom corroborated from personal experience that the peanut snacks in Japan have a thicker coating and are much harder to eat, and she also heard the story of the creation of the cacahuates japoneses from her mom, a member of the Japanese community in Mexico at that time.  I can’t find them in Canada, in my area at least, but I buy several packets every time I go to Mexico; they are sometimes available in the United States [3].  Conclusion: Cacahuates japoneses were born Mexican.

That leaves the Russian salad to consider.  What we could call the “mother of all Russian salads” is the Olivier salad [4], named after Lucien Olivier, a secretive chef who invented his salad in Moscow in the 1860s, and never shared the recipe.  The original recipe was very elaborate, and included meats and seafood, capers, potatoes, and a creamy dressing similar to mayonnaise.  Post-revolutionary Russia and the migration of refugees to the rest of Europe made the salad more popular, with cheaper ingredients; peas would substitute capers, and canned tuna and eggs were used instead of fancy meats, such as in the Spanish “ensaladilla rusa”, a popular tapa.  And from Spain and other European countries – some of which had meatless versions – it probably came to Mexico and the rest of Latin America with immigrants in the early 1900s.  It became popular in Asia as well; my mom recalls “Sarada” as a fancy treat, when she was in boarding school in Japan as a teenager.  The classic recipe in Mexico is a mixture of cooked and cubed potatoes and carrots with peas and mayonnaise, which goes great as a side for meat dishes, and sandwiches.  Sometimes I like to prepare a variation using my mom’s recipe, which she makes for family gatherings, especially Christmas.  Conclusion:  Russian salad originated in Russia, but many countries, including Mexico, have modified the recipe to their taste and availability of ingredients, making it part of their traditions. 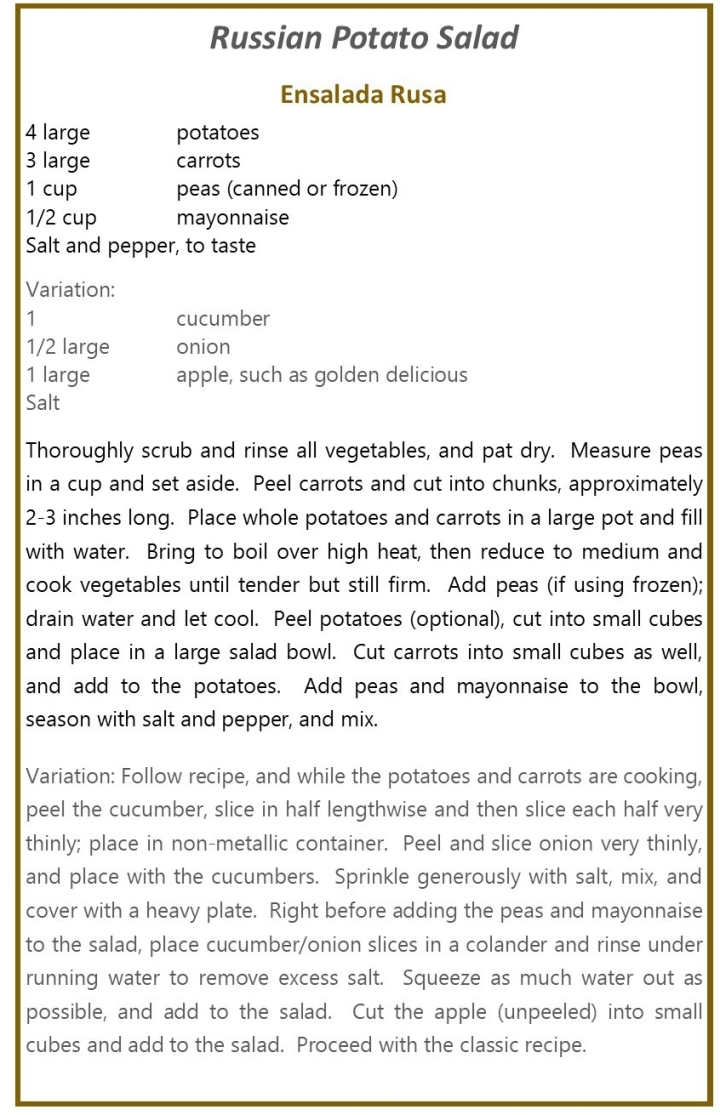 One thought on “Russian Salad, Japanese Peanuts, and Cuban Torta … Alien or Native?”