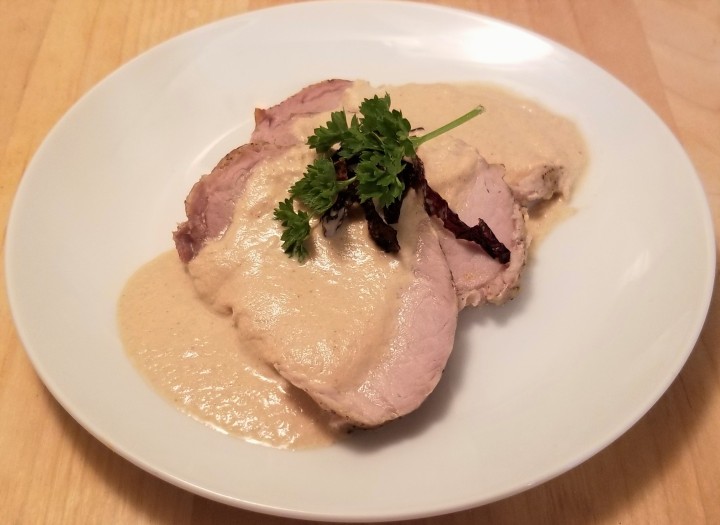 The delicious pipián I enjoyed at “Azul Condesa” restaurant (pictured below) inspired me to nurture my inner chef and dabble into the realm of pipianes:

(Please check my previous post for the whole story.)  To attempt to recreate this dish at home, my starting points were:

1) “EL Pascal Huasteco” – the name of the dish on the menu.
2) The Mexican state of Hidalgo – listed as the place where the dish originated.
3) Ricardo Muñoz Zurita – the restaurant’s chef, who is an advocate for the diffusion of authentic, sometimes less-known, Mexican food, including pipianes.  His pipián blanco (white pipián) was also listed on the menu.

This is what I found and concluded:

1) “El Pascal Huasteco”, the name of the dish – While reading Fray Bernardino de Sahagun’s reference to pipián (pipiana) in his original text of “Historia general de las cosas de nueva España” (“General History of the things of New Spain”, 1577 AD), I noticed he mentioned the Nahuatl name for the dish: Totolin Patzcalmollo, from the words totolin – turkey hen, chicken; patzca – squeeze, extract; and molli – sauce. For the dish, the book lists hen, pumpkin seeds and red chile as main ingredients; I am guessing the name Pascal comes from this term. A pascal is defined as a specific type of pipián, in which the meat, traditionally “chicken or hen, is stewed in a sauce made with sesame [not pumpkin] seed, and some kind of dry pepper” (translated from Larousse Cocina).  La Huasteca is a region along the Gulf of Mexico and Eastern mountain ranges, defined not only by the geographical area that the indigenous Huastec tribes dominated in pre-Hispanic times, but by the plenitude of their cultural heritage.  It includes parts of the Mexican states of Tamaulipas, Puebla, Veracruz, San Luis Potosi, Queretaro and Hidalgo.

2) The Mexican state of Hidalgo, where the recipe originated – Each state in La Huasteca has its own pascal variations.  In Hidalgo, ancho are usually the peppers of choice, so I stuck to those for imparting colour to my sauce.  Nutmeg and cloves are often included; I thought cloves would be too strong for my recipe, but a hint of nutmeg sounded appropriate.  Finally, chicken is the traditional meat in pascal but, for pipianes in general, recipes from Hidalgo often call for pork instead; I ordered my plate with turkey breast at Azul Condesa, but my local supermarket had a free-from-hormones pork roast that was just impossible to resist:

3) Ricardo Muñoz Zurita, the restaurant’s chef – While reading about Chef Muñoz’s pipianes, again I came across his recipe for pipián blanco (white pipián), a recipe from Mexico City, which calls for equal parts of blanched almonds and sesame seeds. Since I found the sesame flavour slightly overpowering in my restaurant meal, I decided to substitute blanched almonds for part of the sesame seed, and used the half/half combination in my homemade recipe.  I have to say that, to my taste, it was still too much of a sesame flavour, so I adjusted to ¼ cup sesame and 1/3 cup almonds.

Now I had chosen all the central elements for my recipe, based on the Hidalgo style pascal: pork roast, ancho peppers, sesame seed and blanched almonds, with a light seasoning of salt, pepper and nutmeg.

Pat roast with a paper towel.  Trim most of the visible fat and a little meat:

Reserve trimmings.  Place roast in a roasting pan; if not done at the butcher’s, tie with kitchen twine.  Set next to olive oil, salt and pepper:

Rub all sides of the roast with oil, then sprinkle very lightly with salt and pepper. Cover loosely with parchment paper and roast in the oven, pre-heated to 350 ºF (180 ºC), for 45 minutes to one hour.

Meanwhile, prepare broth: place reserved trimmed fat and meat in a small pot with water, celery and onion (photo below, left); bring to a boil over high heat, then reduce to a simmer and cook, covered, until meat is tender (approximately 45 minutes.) Strain through a mesh (photo below, right):

Discard celery and fat; reserve meat and onions.  Allow broth to cool down, and reserve.

For the sauce, clean the ancho peppers with a damp cloth, then make an opening along the side by sliding a knife around (photo below, left); remove stem, open pepper, flattening, and remove seeds (centre); cut into strips, separating the best looking ones (bottom, right):

Reserve those strips for later.  Soak the rest of the pieces (about half) in the freshly boiled water, and allow to soak until it cools down.  Process soaked peppers and water in the blender, along with the reserved onions (from the broth), salt, nutmeg and white pepper until smooth, then pour onto a cup or bowl through a strainer (photo below, left).  Heat up one tablespoon of the oil in a small saucepan over medium heat; when the oil is hot, pour the strained sauce and stir, cooking until it reaches boiling point (photo below, right):

Reduce heat to a simmer, and let cook for another five minutes.  Remove from heat and reserve.

In a clean frying pan over low heat, toast the reserved ancho pepper strips just until fragrant and crisp (photo below, left); remove from pan promptly and reserve for garnish.  After roasting for one hour in the oven, remove parchment paper off the pork (photo right):

Return uncovered roast to the oven, and allow to cook until the outside is slightly crispy, and the inside registers at least 155 ºF (65.6 ºC) for well done (the only way I cook pork); it took about 15 more minutes for this roast:

Remove from oven, cover loosely again and allow to rest for at least five more minutes.

Meanwhile, finish sauce:  toast sesame seeds in a dry pan over medium heat, stirring constantly; when a few seeds start to pop, remove from heat and reserve.  To blanch almonds, drop in a pot of boiling water for about 30 seconds; scoop with a slotted spoon and drop in cold water; drain and peel almonds (the brown skin should come off easily).  Chop blanched almonds coarsely and toast just for a few seconds in the dry pan; remove from heat.  Add toasted sesame and almonds to a blender jar, add one cup of the reserved (and cool) broth, and process, first pulsing a few times, then blending until smooth.  In a saucepan, warm up the second tablespoon of oil over medium heat, then pour the white sauce in (photo below, left); warm up, stirring constantly, and just when it starts bubbling, reduce heat to very low heat, stirring gently, to avoid separation of the oil, and achieve a terse textured sauce.  Continue stirring, adding and incorporating a few drops of the reserved red sauce at a time, until desired shade of blushed sauce is reached (photo below, right):

To plate, slice the roast and place two or three pieces on a plate; pour a generous portion of blushed sauce on top, to completely cover the meat; garnish with reserved crispy ancho pepper strips and fresh green leaves (parsley in this case): 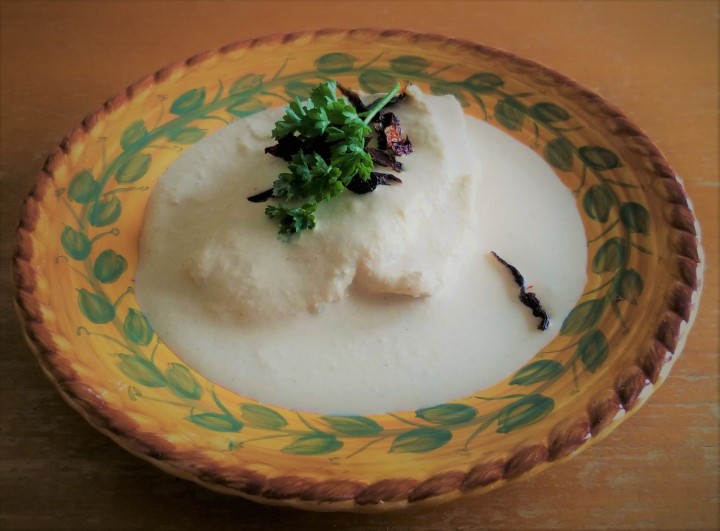 I did not have pea shoots, but I even placed a rogue strip of ancho pepper floating in the sauce, just like my plate at the restaurant!  I have to say, though, that I had a hard time covering up the beautiful roast slices, so I plated the next portion (for my husband, not for me) with the roast partially covered, to show-off the perfectly cooked, yet juicy, meat (photo at the top of the post, and below, right):

The second at-home plate also had better lighting than the first, so it shows the true shade of my blushed sauce, seemingly pale in the first at-home plate.  In terms of flavour, I know personal taste is a big factor, but I liked the subtler sesame taste in my sauce.

There will be leftover broth and the reserved bits of meat used to cook it, as well as a good amount of red sauce, not used in this recipe.  I recommend using the broth in a soup, such as my caldo de verduras; and how about a plate of red enchiladas, stuffed with bits of meat, and covered with delicious ancho pepper sauce?  Eating the leftovers this way should be a much lighter penance than the guilty feeling from wasting good food (click on highlighted text for my recipes.)

This Blushed Pipián is a festive contribution to Fiesta Friday #279 with Angie @ Fiesta Friday, this week with Liz @ Spades, Spatulas & Spoons and Jenny @ Apply To Face Blog.

I am also sharing my recipes at What’s for Dinner? Sunday Link-Up #204 with Helen @ The Lazy Gastronome.