Pipián is a Spanish word of uncertain origin.  According to Wikipedia, it may be: 1) A type of squash; 2) A dish/sauce popular in Mexico, Central America, Colombia, Peru and Bolivia; or 3) The name of a town in Cuba.  In culinary terms, trying to chase a common root for the term becomes ludicrous: in Peru (spelled pepián), it is a corn-based sauce, and the name comes from the Quechua language form pipuyan – thick preparation; in Colombia, it is a thick sauce made with potatoes and peanuts, first created in the Popayán region; some sources in Mexico conclude that it comes from the Spanish word pepita – a small chunk or seed, because Mexican pipián is defined as any dish composed by cooked meat smothered in a very rich sauce, thickened with ground seeds.  I even considered it could come from the Nahuatl word pipiotzin – little chicken, but it is the sauce, not the meat, what characterizes the dish.

What is generally accepted is that one of the oldest recipes for Mexican pipián was served to important Mexica figures, as related in the “Historia general de las cosas de la Nueva España” (“General History of the Things of New Spain”, Vol II, book 8, chapter 13) by fray Bernardino de Sahagún; he describes a number of preparations, amongst which there was one that “comían los señores” (the sirs ate), consisting of hen prepared with red chile, tomatoes and pumpkin seed which “se llama agora pipiana.” (“is now called pipiana.”)

That ancient dish was probably prepared with turkey, duck, or another native wild bird, but nowadays, any meat is used, from chicken to fish, or even venison and tender pork cuts (such as loin, paddle, or rib end).  In terms of the sauce, there are many regional pipianes, which may produce red, green or even white sauces (from different chiles, tomatoes, tomatillos, or their absence) and a range of textures and flavours from the use of pumpkin or other seeds, such as almonds, peanuts, and sesame.

While I was visiting Mexico City this spring, my dear friends treated me to a night out to see the Mexican production of Les Misérables, preceded by a delicious meal at Azul Condesa (68 Nuevo Leon Ave., Mexico City), where they had a Pipián Festival!  The restaurant’s philosophy is to include both classic and less-known creations on their menu, but always true to authentic Mexican cuisine.  We started with a complimentary bowl of olives and heirloom tomatoes:

The critters were chopped into an amorphous sprinkle, so mercifully no body parts were visible; it was delicious!

For our main course, we all picked a pipián from the special Festival Menu:

Two of my friends chose the Almendrado Oaxaqueño – A very subtle sauce with tomatoes, plantain and spices, thickened and flavoured with almonds, from Oaxaca:

My friend Adriana chose Pato en Almendrado de Zozocolco –  Duck in almond and ancho sauce, from Zozocolco, in the state of Veracruz; it was by far the best presentation, served with two kinds of sweet potato mash: 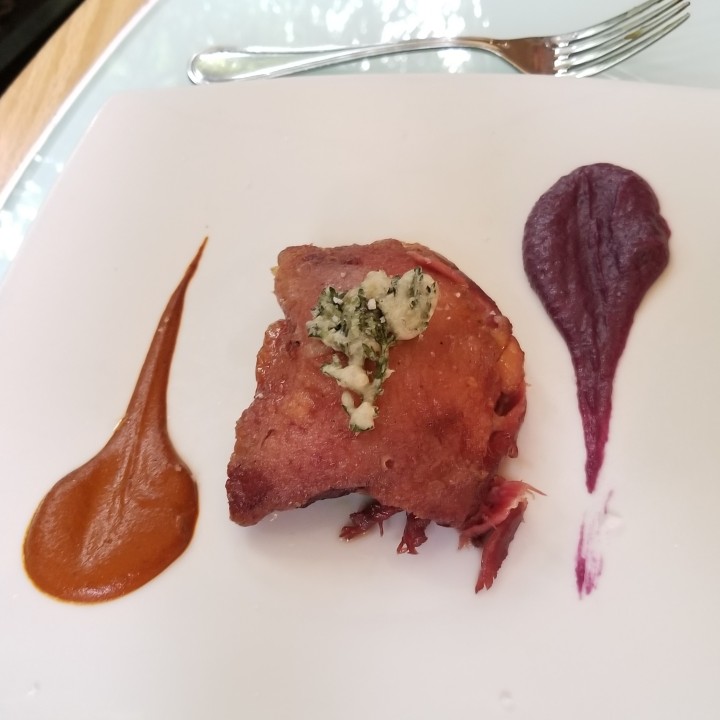 Mine was El Pascal Huasteco, a feature from the state of Hidalgo: 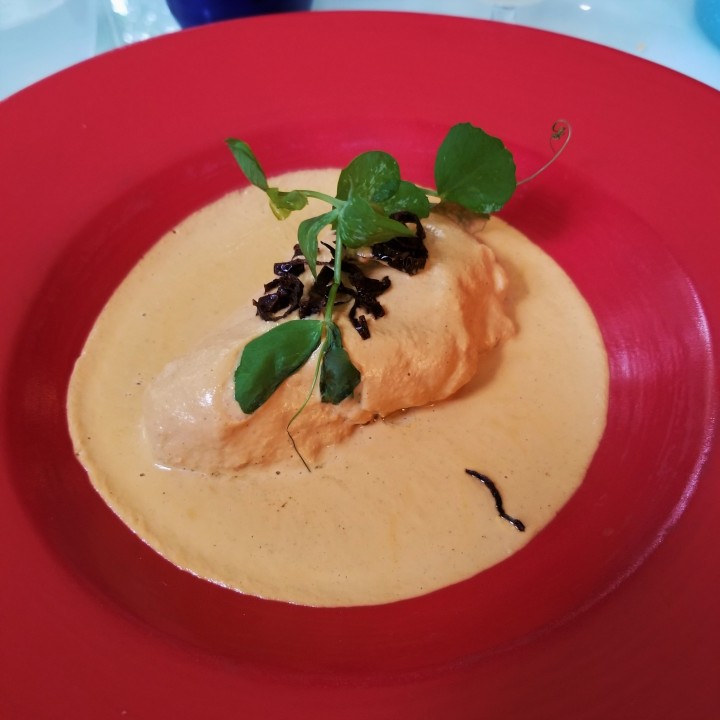 This is a very mild sesame-based sauce; the Hidalgo style recipe uses ancho pepper accents, giving the sauce a blushed tone, and adding a crisp texture with the fried strips on top.  I thought the pea shoot was also a nice touch.

We all had a side of the house rice, studded with raisins and cashews, and served in an enamel mini pot, and a pile of artisan tortillas to share:

I wish I could mention the wine that was paired with my friends’ meal, because they loved it but, since I cannot drink wine, I was not paying any attention.  Also, we were all too satisfied to even think of dessert, and was getting late, so we reluctantly wrapped up our lively after-dinner conversation and headed to the theater.

I was familiar with red and green pipianes, seasoned and thickened with pumpkin seed or almonds, but the sesame seed pipián was a first for me.  I really liked the texture and aroma, but I thought the sesame flavour was overpowering the sauce a little … I was starting to imagine how to cook this dish at home, and solve this issue … I had spotted a pipián blanco (white) on the menu, also with sesame seeds, but almonds as well (aha, blanched almonds!)  I later learned that the restaurant’s chef, Ricardo Muñoz Zurita, has been a great advocator of less-known pipianes, particularly this white one, created in Mexico City, and allegedly Frida Kahlo and Diego Rivera’s favourite.  In my next post, I will share the result of combining these principles into my own blushed pipián.