Dried seeds are the featured ingredient in pipián sauces, with pumpkin/squash seeds being the base for the oldest recipes, before sesame, almonds and other nuts were introduced to the Americas. The rest of the ingredients provide distinctive colours to a pumpkin seed pipián: red, from tomatoes and dried peppers; or green, from tomatillos, pot herbs and fresh chiles, which enhance the colour of the pumpkin seeds.  As for aromatics, onions were known, while garlic was brought to Mexico by the Spaniards, and was quickly assimilated in Mexican cuisine.  Although modern pipianes sometimes include garlic, I could not find any Mexican recipe at all (pipián or otherwise) which called for garlic scapes.  The charge of garlicky flavour and the bright green colour they provide, though, made them an irresistible addition to my previous post’s recipe, and it did not take a lot of ingenuity to think of using them in this post, as well.  From the traditional recipe for green pipián, I skipped the tomatillos, which I thought would be overpowering, and turn the sauce dark when cooked, but included cilantro and serrano peppers.

Warm up one teaspoon of olive oil in a large pan over medium heat; add chayotes and sauté for 5 minutes; reduce heat to low, cover pan and allow to gently simmer.  After 10 minutes, remove lid, add one tablespoon of butter and stir cooked potatoes in, to coat all veggies with the butter.  Season with salt: 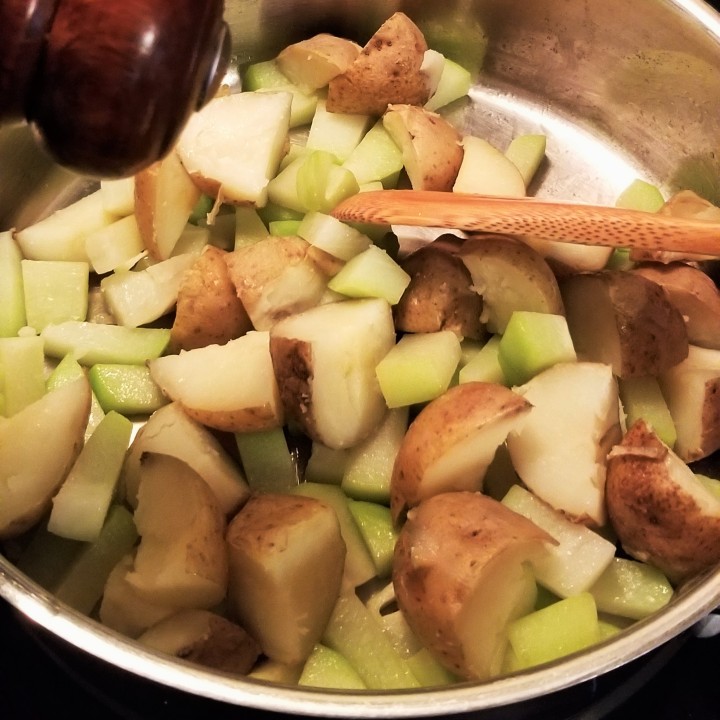 Keep the pan on the burner, but turn off the heat; cover pan and reserve.  While the chayotes are simmering, remove stems from serrano peppers and place in a blender jar, along with the water and cilantro.  Process for about 30 seconds, and set aside (photo below, left).  In another large pan, warm up one tablespoon of olive oil over medium heat; add garlic scape and pumpkin seed paste (photo below, right):

Cook for about one minute, stirring constantly, then add reserved water (photo below, left); season with salt and pepper, and stir with a wooden spoon, lowering the heat to a simmer (photo below, right):

Keep sauce simmering, at very low heat, stirring occasionally so the bottom will not burn, for another couple of minutes.  Turn off the heat, cover, and keep hot until serving time.

On a plate or tray, sprinkle half the flour, place fish on top and sprinkle with the rest of the flour; pat and turn to coat.  Heat the last tablespoon of olive oil in a large frying pan, over medium heat; after one minute, add butter and stir to melt.  Add fish and fry for about three to four minutes per side, depending on the thickness:

Once fully cooked, place portions on dinner plates; arrange a side of chayotes and potatoes, then pour sauce on both the filets and the vegetables.  Serve with lime wedges:

It was a melodious combination for the palate; the mild flavours of the fish and vegetables, the garlicky accents from the scapes, and the freshness of the cilantro and peppers, still left room for the nutty flavour of the pumpkin seeds to shine through, without being too strong either. The natural green tone of the pumpkin seeds was enhanced  by the cilantro and serrano peppers, and the garlic scapes brought the green brightness off the chart.  Finally, my husband not only praised the dish, but went back for seconds, the best seal of approval in our household.

I am bringing my recipe to Fiesta Friday # 282 with Angie @ Fiesta Friday, this week co-hosting with Antonia @ Zoale.com.

This recipe is also going to What’s for Dinner? Sunday Link-Up #207 with Helen @ The Lazy Gastronome.

I am sharing my recipe at Over the Moon #230, graciously hosted by Bev @ Eclectic Red Barn, and Marilyn @ Marilyn’s Treats. Thank you so much to both hostesses for choosing my Stuffed Chicken Breasts in Green Sauce amongst their featured recipes for this week!