A couple of weeks ago, my husband, one of our daughters, and I, had a mini-vacation in Toronto; we stayed at one of the big hotels downtown, and it was a lot of fun to be tourists in the city where my husband grew up, and our daughter is studying and living for now.  Toronto is a beautiful city, no matter whether it is winter or summer time, daytime or dark at night:

On our first night, we were tired, so we decided to have dinner at the hotel’s restaurant. I had the soup of the day, and a Caesar salad:

The soup was tasty, and the salad was too, but I am afraid it was just a pretty standard Caesar salad.  I guess I should not have been surprised; I was not expecting the server to haul a giant wooden bowl and prepare the salad by the side of our table, as it used to be done at top restaurants, but I was hoping to at least get the old-fashioned presentation of whole Romaine lettuce leaves topped with garlic crostini, as shown at the top of this post. That experience, and my recent re-discovery of Worcestershire sauce in Mexican cuisine, led me to wanting to recreate a classic Caesar salad in my kitchen.

Caesar salad was invented in Tijuana, in the Mexican state of Baja California, by Italian brothers and restauranteurs Alex and Caesar Cardini in the 1920s; the Cardini family originally arrived in California, in The US in the 1910s, but later opened a restaurant and hotel across the border to escape Prohibition.  The salad did not include bacon or chicken, but was not vegetarian because they possibly added anchovies, and also from the anchovy content in Worcestershire sauce, one of their key ingredients for the dressing.  For my salad, I decided to skip those extras and use my vegetarian Worcestershire sauce, to make this preparation a truly vegetarian Caesar salad, hoping not to cause a mutiny amongst meat lovers or purists.

Place bread on a baking sheet; rub top side with the cut side of a garlic half (photo below, left); drizzle with one tablespoon of olive oil (photo below, right):

Toast in the oven or toaster oven until crispy.  Set aside.

Rub bottom of a large salad bowl, preferably wooden, with the cut side of the other half garlic; a few drops of olive oil may be added for a stronger garlic flavour (photo below, left).  Add egg and freshly squeezed lime juice (photo below, right):

Add Worcestershire sauce (photo below, left), mix all ingredients together, and season with salt and freshly grated black pepper, to taste (photo below, right):

Mix thoroughly, then drizzle the rest of the olive oil (about three tablespoons) while mixing with the rest of the ingredients in the bowl (photo below, left).  Add lettuce, reserved garlic toast and half of the parmesan cheese, and toss to coat lettuce with dressing (photo below, right):

Sprinkle the rest of the parmesan cheese, and more freshly ground pepper on top: 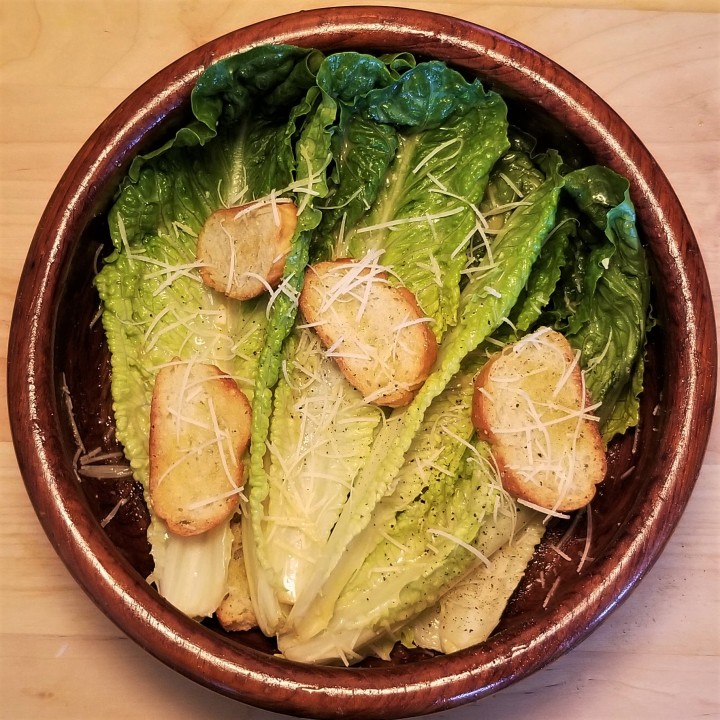 Serve on large plates, dividing ingredients evenly and topping with crostini (photo at the top of the post.)  Although this salad is supposed to be eaten with one’s hands, it is perfectly acceptable to slice the lettuce leaves with a knife and eat with a fork, while soaking in the extra dressing on the plate, and hold a piece of crostini with the other hand and take small bites in between:

The Cardini brothers eventually left the country, and opened another restaurant in Los Angeles, where they continued to prepare their salad with great success, and even got a patent for their dressing, which is still sold in bottles.  The original “Caesar’s Restaurant” in Tijuana closed down for a while, but reopened in 2010 under a new administration; the new owners (a local family) made a complete renovation, but tried to bring back the ambiance and classic menu of the iconic restaurant and bar, including the old-fashioned Caesar salad, actually prepared table side (sniff!)

* NOTE:  About how to cook the egg:  Use eggs at room temperature; bring water in a pot to boil, enough to cover the egg.  I placed two eggs, to test both one- and two-minute cooking times, so I removed the first egg with a slotted spoon after one minute of boiling in the water:

I rinsed it in cold water and set it aside. I removed the second after another minute, and rinsed it as well. Cracked into small bowls, this is how they looked, the one-minute egg on the left side:

Do not be alarmed by the raw egg still remaining in both cases; since the eggs were cooked in boiling water, they are safe to eat.  I personally prefer the two-minute egg with very little un-cooked egg white left, but traditional recipes call for a one-minute egg; another option is to use the yolk exclusively.  The choice of cooking time is more a matter of taste and preferred texture for the dressing.

I am sharing my recipe at What’s for Dinner? Sunday Link-Up #243 with Helen @ The Lazy Gastronome.

I am bringing my recipe at Over the Moon #215, graciously hosted by Bev @ Eclectic Red Barn, and Marilyn @ Marilyn’s Treats. Special thanks to Bev for featuring my Green Rice at this party.