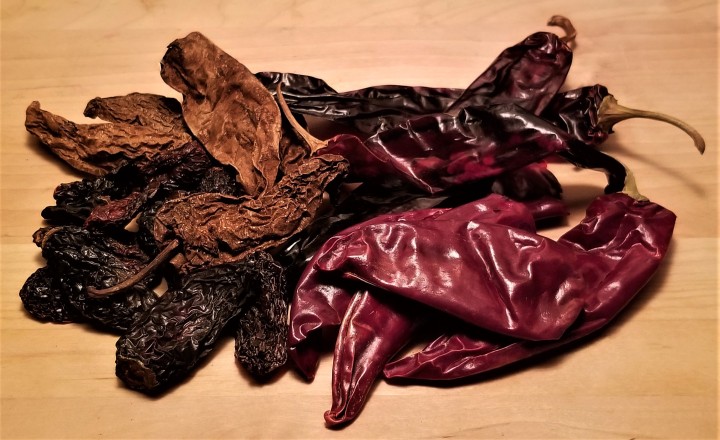 As I mentioned in my previous post, my husband, one of my daughters and I were in Toronto on the weekend, visiting my in-laws for the first time since the beginning of the pandemic lockdown. I am happy to report that they were in good health and reasonable state of mind, all things considered. We stayed at their home, and we all tried to keep social distancing as much as possible, wearing our masks otherwise, and still managed to have a low-key Father’s Day celebration and a few meals together. The one outing I did sneak in, was a visit to a nearby Hispanic grocery store, a small business, but well stocked with Mexican products. I scored some sweet and savoury snacks, Mexican chocolate tablets, fresh chorizo, and a few dried hot peppers. I will write about all my purchases, but in this post, I am focusing on the last item: dried hot peppers – chiles secos. I replenished my supply of pasilla peppers, which I had almost used up for a recent recipe; I also found packets of chiles “Costeño”  (new to me) and morita:

Costeño means “coastal”, so this is a very generic term that could be referring to several peppers from both the East and the West vast coastal regions of Mexico; most of them are red, but they could have other tones, such as yellow.  I am afraid I cannot unequivocally identify them, but I think the ones I brought from Toronto are costeño rojo (red) from the Mexican state of Oaxaca, a pepper from the same family as guajillos:

Also as guajillo, costeño rojo is a moderately hot pepper (3,500-5,000 Scoville units) but it has a fruitier, almost sweet scent; costeño rojo is used in sauces for tamales, and some regional stews.  It is not common to see it outside Mexico (or even outside Oaxaca, for that matter).

Morita are a type of diminutive jalapeño peppers, matured to dark red colour on the plant, then dried and smoked.  Other peppers, namely, mora and chipotle, the paragon of smoked jalapeños, would have exactly the same description; their differences come from which variety of matured jalapeño is used (small for morita, large for mora, or striped, sometimes called Meco, for chipotle) and for how long the dried peppers are smoked (much longer times for chipotle).  In the photo below, it may be appreciated how a regular green jalapeño pepper (left), has a size that would be somewhere between the large peppers that are dried for chipotle (top, right) and the smaller variety used for morita (bottom, right):

In my next post, I will be sharing a recipe for a classic Mexican sauce, using morita and other exciting chiles.

I was lucky to find these chiles secos in Toronto, but as I was doing some reading for this post, I also discovered a spice company called Épices de Cru, based in Montreal (7070 Henri-Julien, C-6, Montréal, H2S 2W1; (514)273-1118), which carries specialty teas, chiles secos and other spices from Mexico and all around the World; they have all the dried varieties mentioned in this post, and they ship to Canada and the US.  I cannot wait to explore their catalogue in more detail, and try ordering a few products.  From their website: “Seeking the world’s best teas, spices and blends … made with respect to both the traditions of producers and the needs of our customers … We are in awe of people who respect their food traditions – they are the caretakers of the world’s flavors … We know that if people shared good tea and tasty food we could all have world peace for dessert … “

9 thoughts on “About a Few Dried Hot Peppers”