For Christians around the world, the Feast of the Epiphany is observed on January 6th, commemorating the revelation of Jesus to the Wise Men from the East, also known as the Magi, or “Los Reyes Magos” in Spanish.  In France and other European countries, the tradition of preparing a special sweet treat for this season may be traced probably to the times of the Roman Empire, first as a tribute to Saturn to celebrate the lengthening of daytime hours, and later re-interpreted as a celebration of the Epiphany of the Magi.  The first cakes were sweetened with honey and adorned with figs and dates; a dry broad bean was hidden inside, and the person to find it in their portion would become the king of the celebration. In the Middle Ages, French cakes remained similar in texture and tradition, called King cakes, but in the context of their Christian religion, forming the cake into a ring to represent God’s eternal love, the fruit on top as the distractions of the mundane, and the hidden bean as a symbol of Jesus’ family trying to hide him from persecution, as related in the Bible’s New Testament.  Epiphany is still celebrated with La galette des rois, a puff pastry round with an almond filling (photo below, left), which sometimes comes with its own paper crown to be worn by the person who finds the bean .   One of my daughters is currently working in France, and last weekend, she made a nudiustertian hazelnut version with her boyfriend (photo below, right):

Spain adopted the tradition of a King cake for Epiphany, called “roscón de reyes” – “kings’ wreath”, later on adding the use of ceramic figurines of a baby or a wise man placed inside the cake; the person to wrest the figurine would be declared king of the celebration, but the one to find the dry bean would have to pay for the next King cake.  On the night of January 5th, children set up a shoe where the Wise Men are to deposit gifts, just as they offered gifts to Jesus.

In Mexico, the Spanish traditions have been embraced; nowadays, many children still place their shoes and go to bed early on January 5th, hoping for a major gift overhaul from “Los reyes”, and people gather together on January 6th at workplaces, schools and homes to partake in the sharing of the rosca de reyes, the Mexican version of the kings’ wreath, also known as Epiphany bread.  I remember being able to taste several roscas in a day, in Mexico, when I was teaching Math at a high school early in the morning, then went to work at the university, attended graduate studies, had a gathering with friends afterwards, and then had some at home; that was up to five slices in one day!  Of course that came with great risk, since the person to find the figurine inside their slice of Epiphany bread would have to host a party with tamales on February 2nd, marked in the Catholic calendar as Candlemas (día de la Candelaria) and the Presentation of Jesus at the Temple.

Below, a photo of my mom slicing a rosca de reyes a couple of years ago; she always loved sweet breads, and my sister and brother in-law got into the tradition of livening up her Epiphany day by getting a giant rosca every year:

I am re-posting my recipe for Rosca de reyes, a very traditional version, made with dry yeast, extra egg yolks for richness and colour, and orange flavourings; the photos are from the 2019 baking session in Canada*.  If figurines are not available to hide, use dry broad beans or whole almonds, as I did in this case.  Decorations of dry fruit and a crumbly paste are also the standard in Mexican roscas; this crumbly topping is both my daughters’ favourite part, and they have always requested a generous amount.

It is very important that all the ingredients are at room temperature, and the milk is warm but not too hot.  I had both instant and traditional dry yeast packets (photo below, left).  Instant yeast may be sprinkled directly with the rest of the ingredients, but since I always like to pre-mix with lukewarm liquid to give it a head start, I chose to use the traditional dry yeast. Mix warm milk with one tablespoon of flour and one of sugar from the measured ingredients; sprinkle yeast on top (photo below, centre).  After a few seconds, it should start bubbling and dissolving, and continue to rise (photo below, right):

Let the yeast mix rise for 10-15 minutes.  Meanwhile, place the rest of the flour in a large bowl, making an opening in the centre, and add the rest of the sugar, the salt, eggs and egg yolks to the opening (photo below, left); I had orange blossom water (photo below, centre) but if not available, use juice from the orange on the ingredient list, after grating the rind onto the mix; I poured the water on the grater to loosen up the grated rind (photo below, right):

Add cubed butter (photo below, left); incorporate with hands or a spatula (I like to use both, to keep one hand clean to gather other utensils and ingredients, photo below, centre); pour yeast mix in and continue mixing (photo below, right):

Once incorporated loosely, dump mixture onto a clean working surface (photo below, left); knead the mixture by folding edges over to the centre, flipping and trying to pick up the dough.  This dough is quite manageable, and this should not take more than a few minutes; after five minutes, the dough comes apart from the working surface, but breaks easily when pulled (photo below, centre); continue kneading, pulling, folding and flipping until the dough becomes elastic, and may be pulled without breaking (photo below, right after ten  minutes of kneading):

Knead for another five minutes, pulling, flipping and slapping the dough on the working surface (photos below):

Form a ball, pinching the dough together towards the centre (notice no trace of dough on the working surface, photo below left); place dough in a slightly greased bowl, pinched side down (photo below, right):

Cover with a clean kitchen towel, and let rest in a warm spot for about one hour.  In the meantime, prepare two baking sheets by lining with parchment paper.  This is a good time to prepare the paste for decorations.  Place butter, egg yolk, powdered sugar and about 1/2 cup of flour in a bowl, reserving the egg white and the rest of the flour separately (photo below, left); mix ingredients in the bowl, and gradually add more flour as needed (photo below, centre), to obtain a smooth and very light paste (I used the whole 3/4 cup, photo below, right):

The traditional dried fruits in Mexican Epiphany bread were figs, orange rind and acitrón (a crystallized Mexican cactus), but the cactus is now an endangered species.  I used dried figs, cut into strips, squares of crystallized papaya, and halved Maraschino cherries, tinted in red and green; I also used two whole almonds, to hide inside the bread instead of figurines:

After one hour, my dough had doubled its size and was ready to form (photo below, left); divide into two pieces, and work with one at a time.  Lightly knead the piece and roll into a rope, approximately two feet in length and a cross section of about one inch (photo below, centre).  Place rope on one of the prepared sheets, connect the ends to form a ring, wrapping one end around the other; choose a random spot to hide one almond (or figurine, if available), placing it inside the bread from the bottom (photo below, right), pinch the dough around the almond, and flip back to conceal the spot:

Let the ring rest in a warm spot, until it rises again (photos below show before and after one hour of resting): 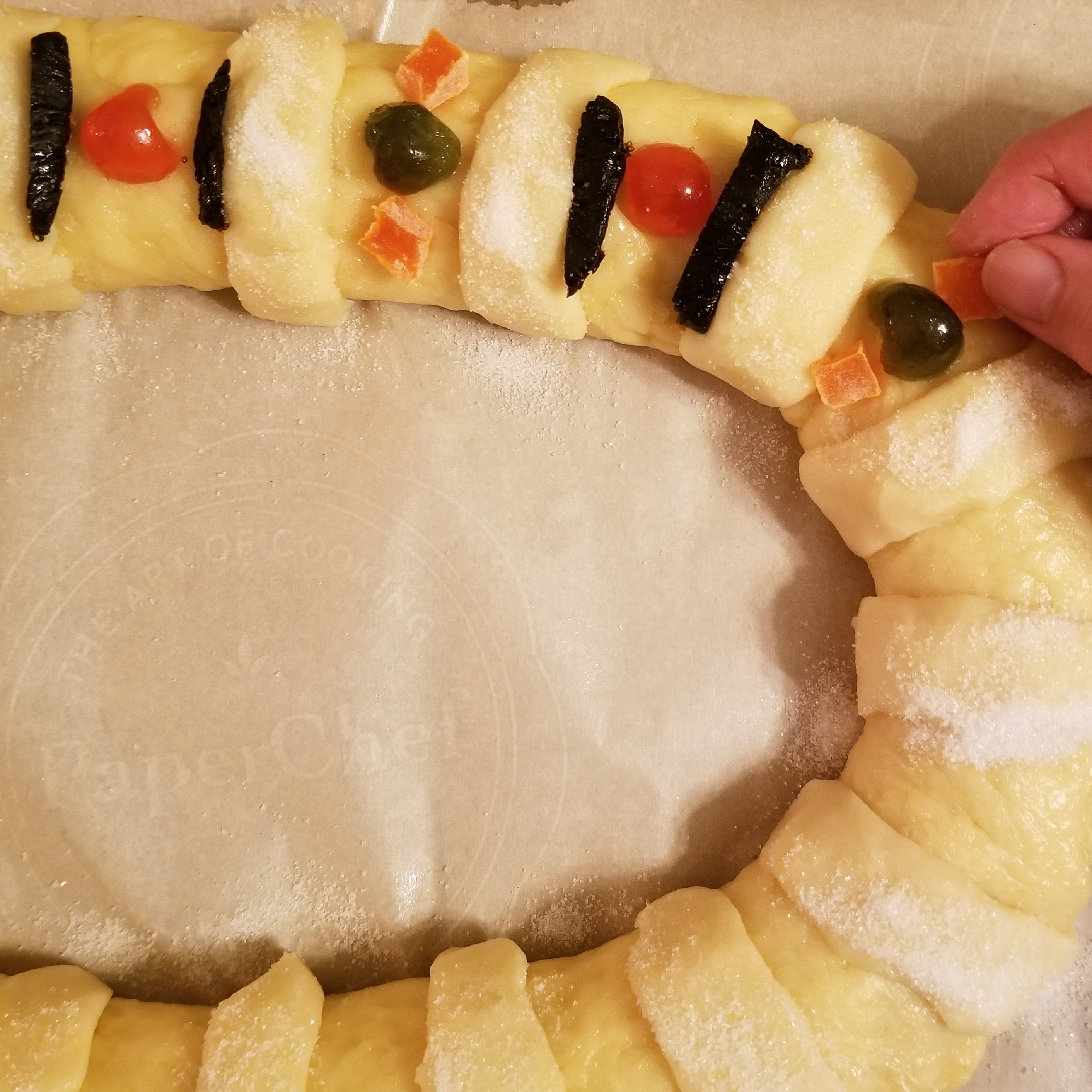 As I mentioned, my daughters really like the paste on top of the ring, so I completely covered the second ring with strips of paste before decorating with fruit. Photos below: second ring before rising (left), after rising, completely covered with paste (centre) and fully decorated, ready for the oven (right):

Preheat oven to 375°F (190°C), then place baking sheets with rings in separate shelves (photo below, left).  Let cook for ten minutes, then switch sheets from bottom to top shelves, and rotate each sheet 180 degrees, so the side facing the front now faces the back of the oven; bake for another ten minutes, until rings are fully risen and golden brown (photo below, right):

This is the second ring, after baking:

Transfer rings to cooling racks, for at least fifteen minutes; this is the first ring, cooling on the rack:

The bread was fluffy,  light and with a flaky crumb:

The best way for thawing after a cold January day is to enjoy a frothy mug of hot chocolate (click here for my recipe), the traditional pairing for this delicious bread:

* This year I am not baking Epiphany bread, since it will be just my husband and me and, although eating up to five slices of bread was fun back in the day, I could not get away with that now without getting indigestion, and putting a ton of weight on.  I will still make some nice hot chocolate and maybe put together a basket of Mexican sweet bread, but without hidden figurines, beans or nuts, since, due to the pandemic, my husband could not possibly buy tamales if he found the figurine, and I will probably just make a batch for Candlemas on February 2nd.

Many thanks to G. Drake for granting permission to post the photo of the Nativity Scene at the top of this post (2018).