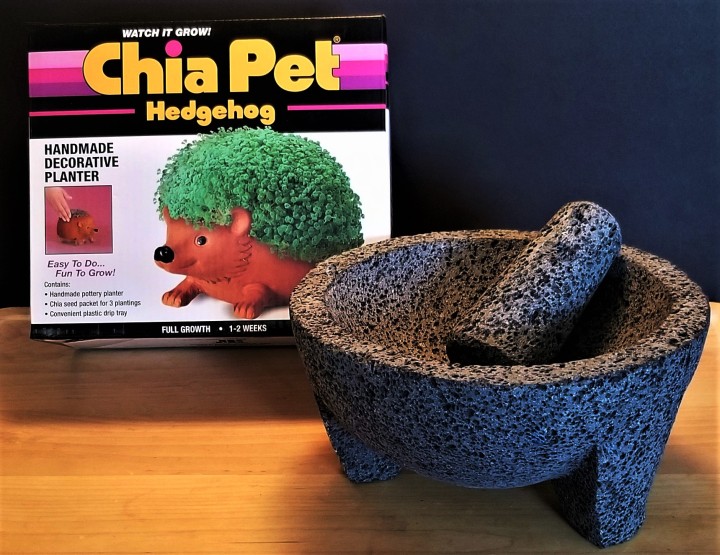 As part of my Christmas gifts, my daughters gave me the two items shown above: a Chia Pet™ and a molcajete.  Both have Mexican origins, so they will be the subject of future posts in more detail, but in a nutshell, a little about these pieces:

1)  Chia Pet™ .-  These were marketed from a traditional Mexican handcraft of clay vessels, predominantly made in the state of Oaxaca; they are often crafted in the shape of rams or deer, with green glazed heads, and then chia seeds are sprouted to cover the body.  In Mexico, these pieces are still used as part of offerings, or as ornaments (click here to see some examples @ Casita Colibrí). The word chia is derived from the Nahuatl word chian – oily.  Chia (Salvia hispanica) is a plant native to Southern Mexico and parts of Central America; although chia sprouts were not grown for consumption in pre-Hispanic Mexica communities, there were two kinds of chia seed that were appreciated for nourishment and as religious offerings: chianpitzáhuac (black chia, as seen in the photo, below) and chianpatláhuac (white chia).  Sometime in the 1970s, Joe Pedott, an American entrepreneur, bought the rights to the name “chia pet”, along with the small company that imported the clay animals directly from Mexico to the USA.  In the 1980s, the product sales reached their zenith, when the pets became a fad; the company started offering not only sheep and deer, but bulls, dogs and other figures.  Because of the high demand, the unfathomable happened, and production was moved to China.  Nowadays, Chia Pets™ are a popular Christmas gift, in the shape of many different animals, cartoon characters, and personalities, still made of clay, to be covered with chia seed that will sprout into green wool,  hair, or even spines, as in the case of my cute hedgehog:

2) Molcajete .-  This is the Mexican mortar, made traditionally of volcanic rock, since pre-Hispanic times; it comes with a pestle called tejolote.  I have shared an image of a molcajete with tejolote  as part of my family heirlooms, a well-worn piece from the 1950s:

The subtle pore definition and soft contours are not a cause for disdain, but a clear evidence of the indefatigable use over the decades, in contrast to my new molcajete‘s large pores and sharp edges, shown below:

Since the old one was a gift from my mom, I do not want to use it anymore, so I was very happy to get a brand-new one for Christmas, and I am looking forward to curing it, and start using it, to see how long it will take to reach the same condition as my precious heirloom.

The Twelve Days of Christmas are now coming to an end with Epiphany Day, marked on the Catholic, and other Christian calendars, as January 6.  One of my daughters was in France for a year, where she met her boyfriend, a native of Lyon; he is visiting Canada, so another tradition my family is starting this year is making a French galette des rois for Epiphany Day. I have talked before about the celebration of Epiphany Day in the Christian faith, and the associated Mexican traditions, including partaking of “la rosca de reyes” (photo below, left), the Mexican Epiphany Bread (click here for full story and recipe.)  The photo on the right shows the galette freshly baked last night by my daughter and her boyfriend:

12 thoughts on “Two Gifts for Me, and from Mexico to the World”