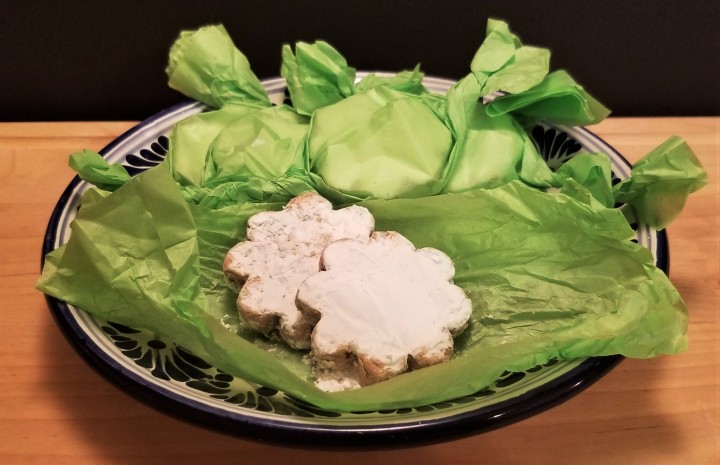 Polvo is the Spanish word for “dust”, which gave origin to the term polvorón, and its plural, polvorones, for certain sweet treats that are either very crumbly (“dusty”), or are “dusted” with powdered sugar, or both.  In Mexico, polvorones may serve as a name for different crumbly and sugary treats, but in Spain, it would cause a tiff with much prejudice, as it refers exclusively to one confection.  Spanish polvorones originated in the 16th century in Andalucía, where an abundance of oak acorns from the region’s forests made possible the proliferation of pig farms, and brought fame for the quality of their pork products; that in turn, promoted the use of lard in their local cuisine, and specifically, in baked goods.  Spanish polvorones are indeed made with lard, and only a few more ingredients: toasted flour, ground almonds, and powdered sugar (in the mix, and generously dusted on top.)

As I have mentioned before, during the Spanish colonial interstice, wheat was first introduced in Central Mexico, and towns and cities in the region, such as Texcoco and Puebla, acquired some of the first mills in the New World, becoming hubs for flour and baked goods.  In Puebla, many recipes for bread and sweet treats, brought from Spain, were adapted and re-developed in Catholic convents; Spanish polvorones are called polvorones sevillanos (after Seville, name of a city and a province in Andalucía), true to the original, but using local walnuts, more readily available compared to almonds.

Old-fashioned polvorones are enjoyed year-round both in Spain and Mexico, but become ubiquitous during the Christmas season, when batches of hundreds of the dusty, and dusted, sugary treats, are prepared in convents and bakeries.   Some modern recipes call for vegetable shortening instead of lard, a good choice for vegan regimes.  I offer the traditional Mexican recipe with lard, scaled down to a small batch, convenient to make at home.

Beat lard:  Place lard in a mixing bowl, and allow to reach room temperature (photo below, left).  Beat with a wooden spatula, until creamy and fluffy (photo below, right):

Toast flour: Place flour in a dry (no oil) frying pan over medium heat, stirring occasionally (photo below, left).  It might seem like nothing changes for the first two minutes, then some steam will be produced from moisture evaporating; at that point, do not leave pan unattended, and start stirring constantly, since the flour will begin to brown rapidly (photo below, centre).  Continue cooking and stirring constantly for another minute or two, until flour looks uniformly, and just slightly, browned (photo below, right), then remove promptly from heat to avoid burning:

Prepare mix:  Continue stirring, away from heat source, for a few more seconds, to cool down and avoid further browning; sift onto the reserved lard through a mesh to catch clumps and burnt bits (photo below, left).  Discard anything trapped in the mesh (photo below, right):

Mix flour and lard together, until a sandy texture is achieved, then incorporate powdered sugar and chopped nuts (photo below, left).  Transfer mix to a clean working surface, and continue mixing with hands just for one more minute.  The mix will turn a tan tone, and should look quite grainy, but clump like wet sand when gently pressed (photo below, right):

Use hands to bring the mix together to form a circle, then cover with plastic and continue moulding, containing the edge with one hand, and using a rolling pin to compact and smooth the circle to around 1 cm (3/8 in) in thickness (photo below, left).  Use a 4 cm (1.5 in) round or oval cookie cutter to cast pieces, pressing mix down with a finger before removing mould (photo below, right).  I did not have plain round cutters, so I used a flower shaped one:

Bake for 20 minutes, then remove from oven, and allow polvorones to rest in the tray, undisturbed, until they fully cool down to room temperature.  They will not look too different from before baking in terms of size and colour, as seen below, but the texture will look firmer:

If the cut-outs were not cast properly, they will tend to form fissures, and might crack during baking.  In the photo above, a few of mine show thin fissures, but only one actually  broke, and I am blaming the flower shape for that (LOL), which is harder to press than a plain circle or oval.

Place a mound of powdered sugar on a plate, then a polvorón on top, to cover the bottom with sugar.  Coat the top dusting more powdered sugar through a mesh:

It is better not to try to flip the treats, to avoid breaking or crumbling.

Transfer to a single- or double-layered tissue paper rectangle (15×20 cm – 6×8 in), as seen in the photo below, left, then fold paper and twist ends to wrap treat (photo below, right):

Repeat with all the polvorones.  They may be stored in a container with lid at room temperature for about one week.

These sweet and delicate polvorones are a perfect treat for a coffee break:

The cross section reveals a crumbly and light texture, with a few nutty speckles, inside, all coated with dusty sweetness on the outside:

I definitely recommend plain-edged cookie cutters, I think I am going to get some round ones, which also come in handy when making biscuits, donuts, etc.  For your convenience, click on the images below for products available on Amazon™. DISCLAIMER: Any reviews included in this post are my own, for items I have purchased, not provided by any company; as an Amazon Associates Program affiliate, I might receive a commission for any purchases originated from the links below, at no extra cost to you (thank you to readers who have bought other products starting with a click from my links!):

I am bringing my recipe to Full Plate Thursday #565 with Miz Helen @ Miz Helen’s Country Cottage.

I am also sharing my recipe at What’s for Dinner? Sunday Link-Up #344 with Helen @ The Lazy Gastronome.

I am also joining Classy Flamingos Blog Party for December with Linda @ On Poinsettia Drive.