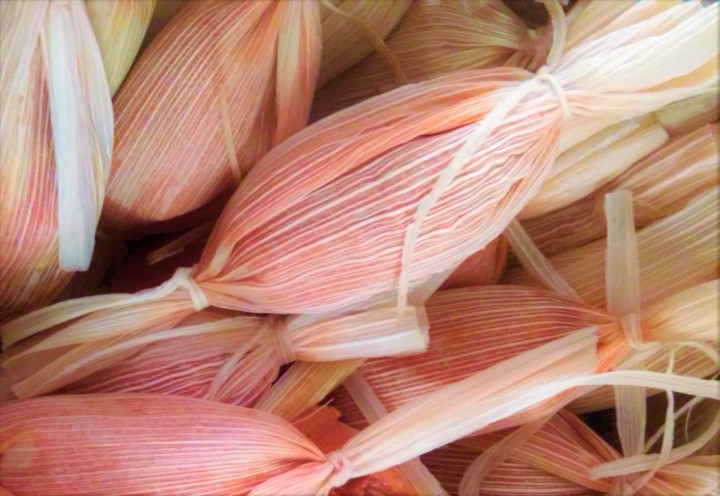 Tamales are a pre-Hispanic dish, and their name describes them with precision; the word tamal comes from the Nahuatl tamalli – wrapped. The plural form in Spanish is tamales, and that is probably why it translated into English as tamale.  A tamale then, is any preparation that is wrapped, traditionally in some plant material such as corn husks, banana leaves, etc.  For corn dough tamales, a paste or dough is seasoned, either sweet or savoury, and may or may not have a filling.  They are traditional in many Latin American countries, and in Mexico, practically each state has at least one local recipe.

Tabasco is an incredibly fertile state, with rich soil and unique ingredients, thanks in great part to the almost constant rain (annual average precipitation of 39.37 inches) and its abundance of rivers and lakes; many of the local ingredients and cooking techniques have been included into a wide variety of tamales, such as tamales de chipilín (with leaves from a native plant), pejelagarto (a fresh water fish), or caminito (“small road”, because the filling is placed lengthwise on the dough), to name a few.  The recipe I am sharing is another example from Tabasco and its neighbouring states, called Chanchamitos, round shaped and seasoned with annatto.  The name comes from the Mayan chan-chan – something dear and familiar, made into a Spanish word with the plural diminutive “itos”, meaning something along the lines of “little darlings.”

Cut pork shoulder into 2-inch pieces, place in a large pot and add water to cover meat; bring to a boil, then cook over medium heat, covered, for about one hour, until fork-tender. Remove meat, shred and reserve. Strain broth through a colander into a measuring cup; let cool, and reserve:

Wash and dry tomatoes and pepper, score a cross on the bottom side of each tomato; peel onion and garlic clove; set together with annatto and salt:

Place tomatoes in a pot with boiling water for a few seconds, until the cross on the bottom starts to burst; remove from the water, remove stem end, peel, and chop; place in a bowl, along with any juice collected on the cutting board. Remove stem and seeds from the pepper, and chop finely (makes approximately 1/3 cup). Chop onion finely (makes approximately ½ cup). Mince garlic.  Measure salt.  Sprinkle annatto onto the water in a small bowl, then mix until fully incorporated into a slurry:

In a large pan over medium heat, add oil (or lard) and let warm up for about one minute. Add shredded pork, stirring to coat and lightly crisp; incorporate onion and cook until translucent. Add peppers, sautéing for another minute, then add garlic on top (so it will not burn) and stir for just a few seconds:

Add annatto slurry, followed by the tomatoes and salt:

A lot of steam will be produced from the tomatoes; stir constantly, scraping brown bits from the bottom of the pan.  Reduce heat and let simmer for about five minutes, adding a little water if needed.  The filling should be saucy, but not runny: 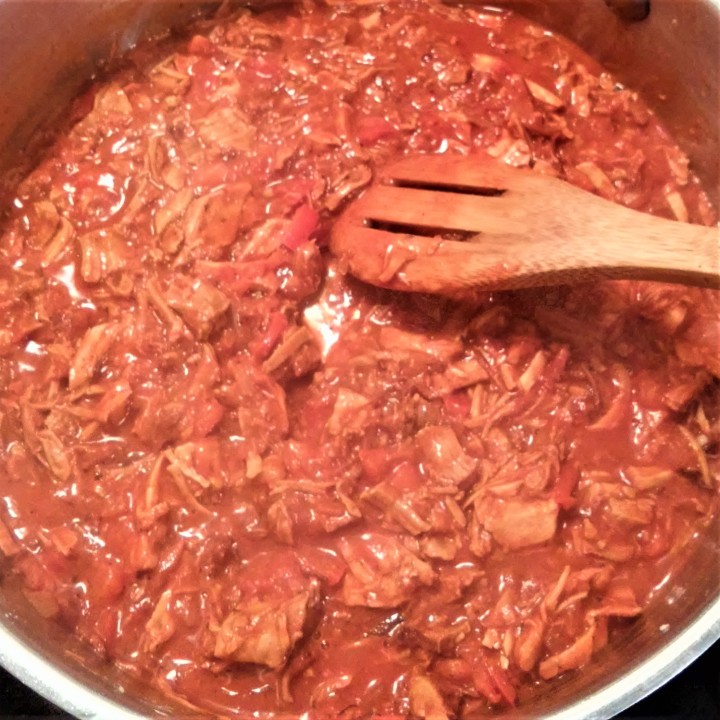 Let cool in the pan. Meanwhile, prepare the wrappers; if using banana leaves: wash thoroughly, dry, then roast until they turn slightly darker and become pliable.  I used dry corn husks (photo right).  Notice how the husks on the left are generally clean, but on the right, the top husk has some dark spots, probably from mold, and some have brown stains.  Those husks will be discarded once separated from the bunch.

Wash under running water, separating the husks very carefully.  Discard pieces with stains or dark spots.  Dunk the rest in water and drain a couple of times, then let soak in hot water for at least 20 minutes:

Remove from water, gently squeeze excess water and reserve, propped in a colander.

For the corn paste, skim lard from reserved broth, one tablespoon at a time, into a large mixing bowl; if needed, add more lard or vegetable oil for a total of 6 tablespoons.  I had 3 tablespoons of each:

Note: In a traditional recipe, about one whole cup of lard would have to be pummelled first, until fluffy; in more contemporary recipes – like this one – the addition of baking powder or baking soda imparts the same airy feeling to the paste, with less fat needed.

Add corn flour, baking powder, and salt, then gradually add broth while mixing at low speed. Once incorporated, beat at medium-high speed for about 5 minutes, until the paste becomes fluffy and smooth:

Note: this is my generic paste for tamales, which may be used for other applications; for vegetarian recipes, use vegetable oil and water instead of lard and broth.

In a small bowl, pour the water and sprinkle annatto powder on top; mix until fully incorporated. Add to the corn paste and mix al medium speed until the paste is uniformly coloured: 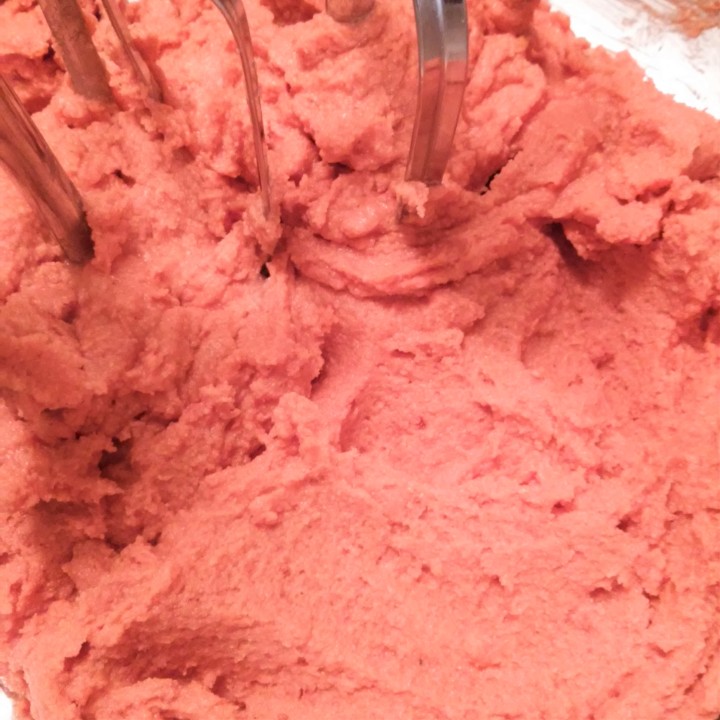 Set up an assembly station with the husks, paste and filling around a working surface. Take small or ripped husks and pull narrow ribbons; keep handy, as well.  To assemble tamales, take a husk on one hand, then scoop about ¼ cup of corn paste on the husk, spreading with the back of the spoon. The photo on the left illustrates the assembly station and a husk being prepared with the generic paste; the photo on the right shows the chanchamito paste, which is spread as a band, mostly along the centre of the husk, and not too thinly:

Scoop a mound of about ¼ cup of filling on top of the dough; fold husk in half, lengthwise, pinching and folding the two edges together:

Using the husk ribbons, tie knots on either side, twisting the husk ends just slightly and forming a rounded shape in the middle:

Repeat with the rest of the materials; it makes approximately 20 small chanchamitos:

I do not own a large steamer, so I always use a large pot, and fit a metal colander on top. Fill bottom of the pot with at least one inch of hot water; place colander on top, making sure the water does not touch the colander:

Using leftover husks, line the bottom of the colander, then place the chanchamitos vertically, folding one of the ends of the husks, if needed:

Cover with more husks, then with a clean kitchen towel, so the tamales will not get wet with condensation during steaming.  Place lid, completely closing the pot:

Bring hot water to a boil over high heat, then reduce to a rolling boil, and let steam for 40 to 60 minutes.  I always check the bottom of the pot halfway through, to make sure it is not drying too fast; if needed, add boiling water.

Process all the ingredients in the blender until no chunks are left, but the mix is not completely smooth.  Heat oil (or lard) in a small pan, then pour tomato blend and cook on high heat just until it comes to a boil. Turn heat off and continue stirring for about half a minute; the sauce will be runny but nicely textured. Remove from heat, and let cool:

After 40 minutes, check if the tamales are cooked by carefully partially removing the towel with tongs (it will be steamy and hot), and taking one tamale from the pot; pull ribbons off away from the husk, then unfold the wrap; the bundle of dough should easily separate from the husk, and look moist but firm, not pasty.  If not ready, carefully fold and place back in the pot, to re-test a few minutes later, until ready; my batch needed a whole hour:

Serve hot chanchamitos directly from the pot, with the spicy sauce on the side, or peel and pour sauce on top:

Breaking a chanchamito open with the fork required no effort; what was really hard was to wait long enough to take a photo before devouring it with no further ceremony: 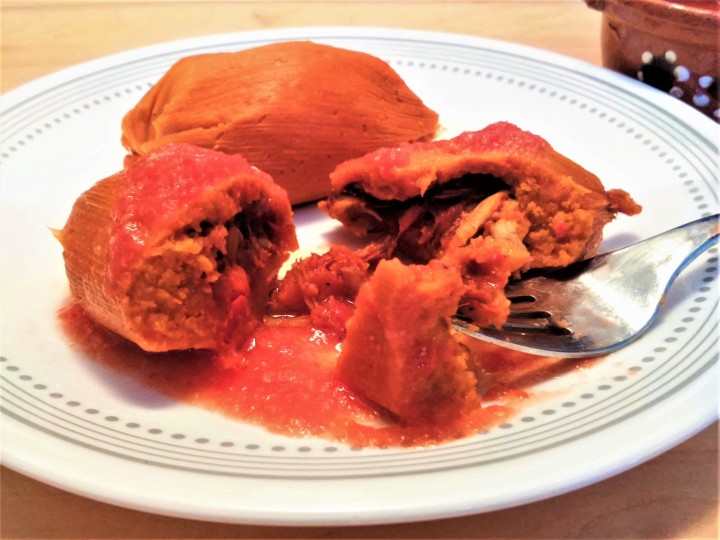 For a taste of a “puesto de tamales tabasqueño” (tamale stand in Tabasco), watch this Youtube video, showing different tamales, and a chanchamito (wrapped in banana leaves) being served (31 seconds long).

Tamales are traditional fare during the Christmas season in Mexico, so I am bringing my chanchamitos to add to the festive mood at Fiesta Friday #253 with Angie @ Fiesta Friday, Liz @ Spades, Spatulas, and Spoons and Mila @ Milkandbun, co-hosting this week.

I am bringing this recipe to Totally Terrific Tuesday # 212 graciously hosted by Sherry @ The Savvy Apron and Nicki @ Sweet Parrish Place.

22 thoughts on “Chanchamitos – Tamales from Tabasco”