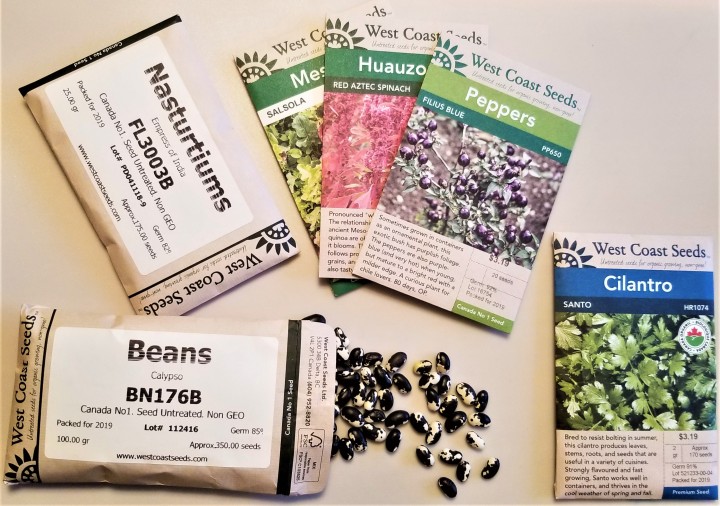 In cold-winter regions, every gardener  goes through the process of feeling tired of being confined indoors, “growing vicariously” through reviews of gardening sites and seed catalogues, and planning the next season.  Almost feeling like a part of a special guild, many of us make the promise to “just look, not buy any more seeds this year”, only to give in to the exciting new varieties, or items that have been on the wish list for too long.  I confess myself as one of the weak ones, since I just spent a small fortune a couple of weeks ago, on non-GMO seeds from West Coast Seeds™, a great Canadian seed company operating in British Columbia; the photo at the top of the post shows my little treasures.

I had more than enough bean and pepper seed already, and I have tried several different varieties over the years, so I was definitely not going to get any more this year but … look at those cute black and white beans (they are a Mexican heirloom and their nickname is Orca beans!) and the peppers, their fruits are green-pea-sized and turn purple … I mean, I am not made of stone!

For the nasturtiums, I ran out of seed last year, so I felt justified to buy some of this variety (Tropaeolum majus) which has bright red blooms, and I have not tried before.  Nasturtiums are great team players in the garden, diverting pests away from more vulnerable crops, attracting pollinators and, they are also edible, providing a pretty splash of colour in salads and sandwiches.

As for cilantro, although I save my own seed every year, I decided to give this variety a try, because it is advertised as slow to bolt.  Cilantro grows better in cool temperatures, so by the time the tomatoes and chiles are ready for harvest in the summer, most of the large cilantro leaves have fallen victim to the heat, and the plants have started to bolt (bloom and go to seed). Hopefully this summer I will have more cilantro leaves than last year, when I made my zero-mile salsa.

Finally, about the huauzontle and salsola seeds, a little background is needed.  Quelite is a generic name in Mexico, from the Nahuatl quilitl – edible green; a close translation to English would be “potherb”.  There are hundreds of species that can go under the quelite umbrella, and may be classified by region, but also by time in history.  Originally they referred just to native plants, such as huauzontle (Chenopodium nuttalliae), a tall plant with lingular plumes that carry edible seed,  and purslane, which I have mentioned in previous posts; during and after colonial times, new edible greens brought from Spain and around the world have been making the list, such as radish leaf and watercress.  Salsola is a genus of plants from the Amaranthaceae family, the same as huauzontle and amaranth, but native to the Old World. The seed I got is Salsola komarovii, originally from Asia, known in Japan as okahijiki — literally, “land seaweed.” I found it really interesting because of its Japanese background, of course, but also because it sounds and looks very similar to a Mexican quelite called romeritos (Suaeda spp). Romeritos are also part of the Amaranthaceae family, available only seasonally even in Mexico, and practically impossible to find anywhere else; if I succeed growing salsola and huauzontle, they will be a great addition to my Mexican pantry.

I am certain I will come back to talk about these new-to-me crops during the growing season (April to November in my area), but for now, the seeds will have to wait around indoors a little longer, just like me.

21 thoughts on “My New Seeds Have Arrived!”