Manchamanteles is a traditional Mexican dish, prepared nationwide, with several regional variations, but all following a common cypher.  The sauce is classified as a mole because it includes hot dry peppers (mainly ancho, but mulato and pasilla are also used in some recipes), nuts (almonds), spices (cloves, cinnamon) and herbs (oregano, thyme); the resulting deep tone inspired its name, literally “tablecloth stainer.” The Mexican state of Oaxaca considers Manchamanteles one of its local culinary treasures, included amongst its “siete moles” – “seven moles”, and the state of Puebla also claims the dish as a regional creation. All recipes include tomatoes, as well as a medley of sweet flavours, coming from roots (usually sweet potatoes) and fruit, such as plantain, pineapple and stone fruit (apple, plum, etc.).

Traditional recipes always have meat (chicken or pork being the norm), and start by cooking it in a pot, with the other components prepared separately, and then integrated into the pot to stew. This makes up for a nice taste profile, but some of the ingredients with mild flavours might get lost, and the beautiful colour palette from the vegetables and fruits gets completely smothered in the sauce. As I mentioned in a previous post, though, I enjoyed a wonderful version at a vegan restaurant that has been all the rage in Toronto (temporarily closed due to the pandemic); it featured sunchokes (a root vegetable) instead of meat, and brilliantly plated by integrating components at serving time, unmasking the beautiful colours of some ingredients as toppings, without covering them up with the mole.

In my kitchen, I wanted to prepare the traditional dish with chicken, but offer a meatless option to my vegetarian daughter, so this approach allowed me to assemble individual plates, catering to personal preferences, and to achieve the nice restaurant-style presentation to showcase all the colours and textures in my Manchamanteles (as shown in the photo at the top of this post, with chicken.)  I could not find sunchokes anywhere in my region, so I used parsnips and carrots instead. Sunchokes (Helianthus tuberosus)  are nutritious tubers with a good amount of protein, harvested from an easy to grow plant in the sunflower family (I might try to grow them sometime); if chicken is omitted in my recipe, a nice side of beans might be a good alternative source of protein.

For the chicken (omit for vegan option):
1 chicken; bone-in, skin-on, cut up into pieces; boiled in water
1 tsp salt, or to taste
1 tsp dry Mexican oregano or marjoram
2 tbsp oil

*NOTE: If using chicken, transfer cooked pieces from the cooking water onto a bowl or plate, and reserve 1 cup of the resulting broth, for the sauce.

Prepare root vegetables: wash roots, scrubbing thoroughly to remove dirt; I used a large sweet potato, 2 large carrots and a bunch of parsnips from my garden:

Pre-heat oven to 375°F (190°C).  Remove ends and peel all roots; cut up sweet potato into bite-size chunks, and the rest into thick sticks, about one inch in length: 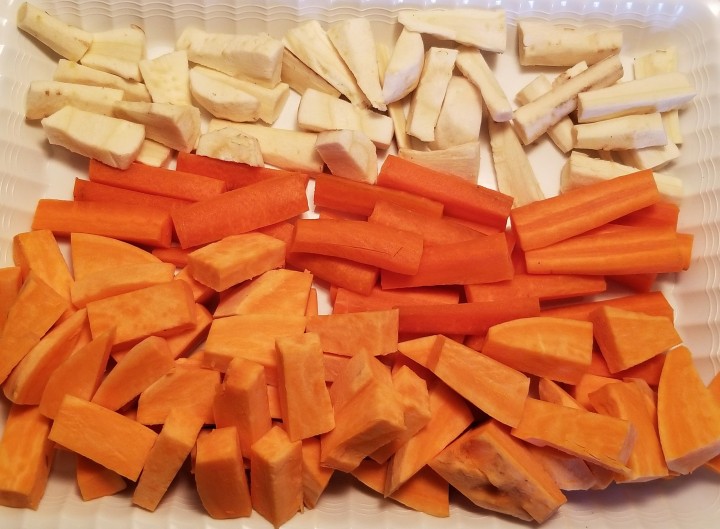 Arrange on a baking sheet lined with parchment paper, drizzle with oil and sprinkle with salt.  Roast in the oven until fork-tender and slightly charred, around 45-60 minutes.  Keep warm in the oven until serving time.

Meanwhile, prepare sauce: lightly toast almonds in a dry skillet (no oil), stirring frequently, for just one to two minutes, before they start to brown (photo below, left); remove promptly from skillet, and reserve.  In the same skillet, toast the ancho peppers being careful not to burn them, turning frequently and transferring to a bowl with the hot water (to keep it vegetarian, or broth, if using chicken), as shown in the photo below, right:

While the peppers soak, roast the tomatoes, onion and garlic in the same skillet; remove garlic first so it will not burn (photo below, left), and continue roasting the rest until nicely charred (“tatemados”).  Remove from heat and allow to cool down; remove stem ends from tomatoes.  Once the peppers are hydrated and everything has cooled down, place peppers and soaking liquid, salt, half the almonds (reserve the other half, for garnish), tomatoes, onion, and garlic in a blender jar (photo below, right):

Process for at least one minute, until the texture is smooth and there are no chunks left.  In a pot, warm up oil over medium heat, then pour sauce (photo below, left); stir and let fry for a few seconds, then add cinnamon, cloves, black pepper, and crumbled oregano (or marjoram) and thyme, stirring to incorporate (photo below, right):

Reduce heat to a simmer, and allow to cook for at least 20 minutes, stirring occasionally.  Adjust seasoning with more salt, to taste, and keep warm on the stove until serving time.

Transfer pineapples with plantain discs, and reserved almonds, and keep warm until serving time, along with the roasted roots, in the oven (turned off now, but still warm):

If using, finish chicken: Warm up the last two tablespoons of oil in the skillet over medium/high heat.  Sprinkle reserved cooked pieces of chicken with salt and oregano (or marjoram), and arrange in a single layer in the skillet, skin side down; once crispy and golden brown, flip the chicken and fry for a couple more minutes: 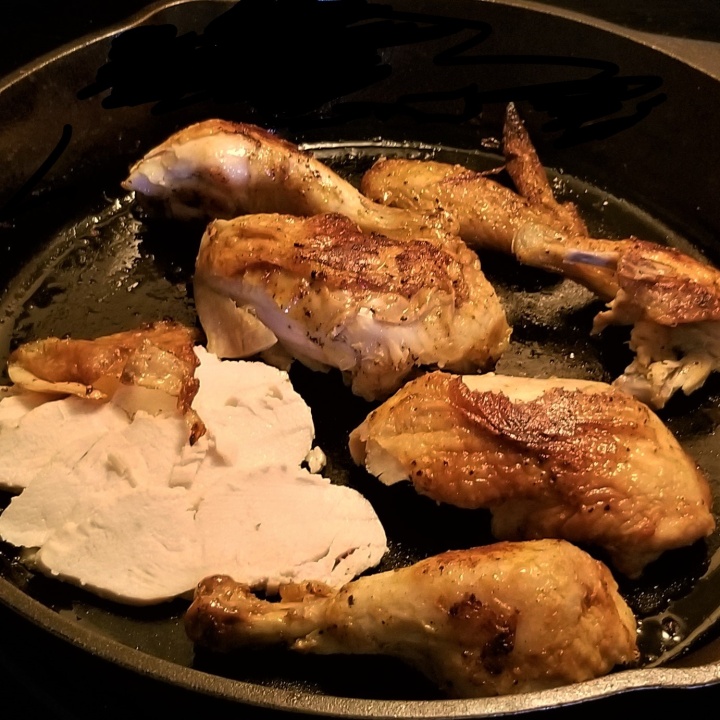 To plate: scoop some sauce on the plate, then place roots (and a piece of chicken, if using) in the centre; top with more sauce, then arrange fruit around and finish with slivered almonds (vegan plate below, and with chicken at the top of this post): 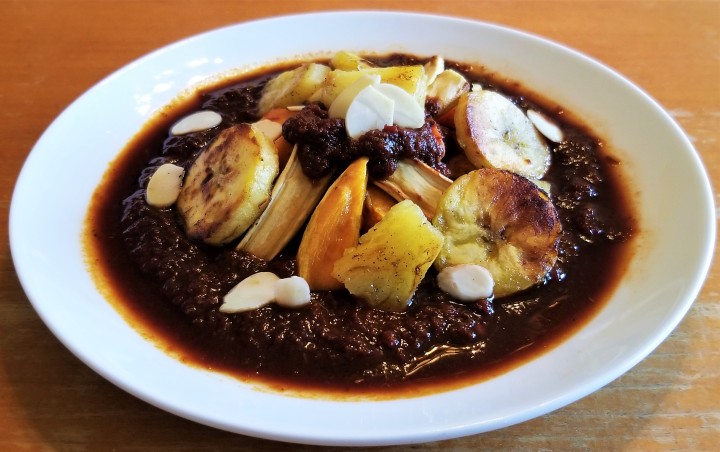 Look at that fiesta of bright colours against the dark Manchamanteles mole, and the pristine tablecloth, as white as a jasmine bloom! I am happy to report that there were no stains on it, in spite of the “tablecloth stainer” reputation.  Those are news good enough to be cheerful, but even more so if enjoyed as proposed in my next post, as part of a menu for a Cinco de Mayo celebration at home!

I am continuing the celebration at Fiesta Friday # 327 with Angie @ Fiesta Friday; voting for favourite entries from Tuesday May 12 through Thursday May 14, 2020.

I am sharing my recipe at Over the Moon #224, graciously hosted by Bev @ Eclectic Red Barn, and Marilyn @ Marilyn’s Treats.

I am also joining What’s for Dinner? Sunday Link-Up #252 with Helen @ The Lazy Gastronome.

I am joining another fiesta ! Fiesta Friday #358, with Angie @ Fiesta Friday, co-hosting this week with Eff @ Food Daydreaming.

15 thoughts on “Manchamanteles – A Festive Medley of Flavours and Colours”