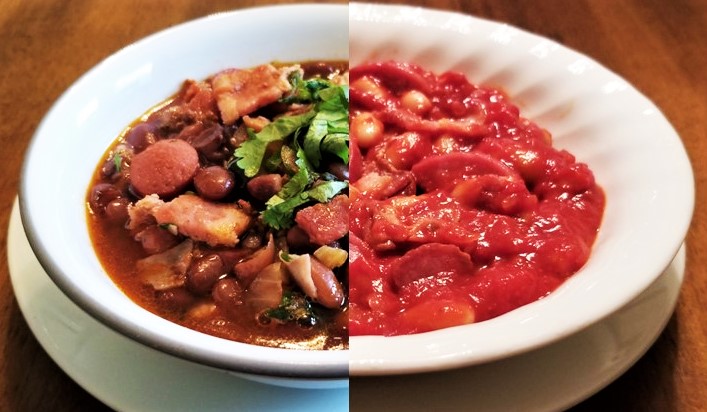 The Fédération Internationale de Football Association (FIFA) World Cup 2022 has started in hosting country, Qatar, in spite of the many controversies regarding change of season due to climate conditions, ban of alcohol at stadiums, and very disturbingly, human rights violations; the host nation has declared they are addressing the issues, but seeing is believing, especially regarding the way they handle the tournament.  I do not follow soccer at all, but as I mentioned four years ago, the World Cup is sort of imprinted into every Mexican’s brain, so we all are soccer fans at least every four years.  For the 2018 edition, I thought it would be fun to prepare a country-themed fusion dish for each of Mexico’s first round matches, so I shared recipes for Wurst Tortas for the match against Germany, Queso Fundido Back Ribs for South Korea, and Sommarsill Tostadas for Sweden.  This time around, instead of creating a fusion dish, I tried to find dishes from each opponent, with similar ingredients as a traditional Mexican dish; I then prepared one batch of each, and they were tested by my family, next to each other.  From the results of the culinary match, I am making predictions for the outcome of the corresponding soccer game.  Mexico is in Group C with Poland, Argentina and Saudi Arabia … let the games begin!

The Republic of Poland is a country in Central Europe.  Like other nations in the region, some of their staple ingredients are potatoes, cabbage and beets, but their Fasolka po Bretońsku (Beans a la Brittany) got my attention because they call for tomatoes, originally from Mexico, and well, beans, native to the American Continent; the rest of the ingredients are smoky Polish sausage, bacon and seasonings.  It was not hard to find a Mexican dish for this match; Frijoles a la charra (Horseman Style Beans) also include tomatoes and beans, and feature a potent variety of meats, including Mexican chorizo and bacon.  For both recipes, I decided to remove and reserve the meats after cooking, and drain most of the fat, to make the dishes a little lighter.  I believe what will make the difference in this match is going to be the seasonings.

This dish is very traditional in Northern Mexico, but almost everyone knows about it in all of Mexico.

This recipe is loaded with a variety of meats:

Remove packaging and casing from chorizo, slice hotdogs, bacon and ham.  In a large pan over medium heat, fry bacon until crispy, stirring to cook evenly.  Push to the side and add chorizo; break up chorizo with a spoon, and cook, stirring frequently, until crispy. Remove from heat; remove and discard most of the fat, saving about two tablespoons:

Return pan to heat and add sliced sausage and ham, and fry, stirring:

Continue frying and stirring, until all the meats are crispy and slightly browned, then transfer to a bowl and reserve.

Add the reserved two tablespoons of fat to the pan, then add onions, and sauté until translucent.  Add peppers and continue frying for a couple of minutes, then add garlic, and finally, the tomatoes:

Cook for ten minutes, stirring occasionally to avoid burning the bottom of the pan.   Add half a cup of broth (or water) to deglaze the pan, scraping any bits from the bottom.  Add beans:

Add the rest of the broth (or water), stirring, to bring to boil:

Reduce heat to a simmer, then cover and cook for ten minutes.  Uncover and return reserved meats to the pan, adding tomato paste:

Season with salt and pepper, to taste, stirring to meld all flavours together.  Reserve some chopped cilantro to decorate at serving time, then add the rest to the pan:

I only made a couple of substitutions, otherwise I mostly followed a recipe by Anna @ Polish your Kitchen; she shares memories of growing up in Poland in the 80s and 90s, and Polish food and customs kept alive in her Polish-American home.

For the meat in this recipe, I used good quality bacon, and since I could not find smoked sausage, I used cooked Polish sausage:

Slice bacon and sausage.  Fry bacon in a pan over medium heat, until crispy, stirring to cook evenly.  Add sausage and continue cooking and stirring, until sausage is slightly browned.  Remove from heat; remove and discard most of the fat, saving about two tablespoons:

Transfer bacon and sausage to a bowl using a slotted spoon, to drain any fat remaining. Reserve.

In a large pan over medium heat, warm up the reserved fat, then add onions and sauté until translucent; incorporate bay leaves, allspice and smoked paprika (if using):

Stir and cook for a few seconds, to allow the spices to bloom, then add tomato paste and continue frying for another twenty seconds:

Pour in the crushed tomatoes:

Drain the beans and incorporate to the pan, stirring:

Add sugar, stirring well.  Reduce heat to a simmer, and cook, covered for twenty minutes.  Uncover and return reserved sausage and bacon to the pan:

Season with salt, to taste, and allow to cook until the meat is nice and hot.  Serve immediately:

For my guess for the soccer match, I am going to roughly divide the points by 3, so my prediction is a win for Mexico, score Mexico 4 – Poland 3.   The match will take place on November 22, 2022, starting at 11:00 am Eastern Time.  Please feel free to comment and give your own predictions on what you think will be the result of this or any other game of your interest.

FUN FACT – The expression “to spill the beans” has a number of possible explanations, one coming from an ancient practice of voting by placing coloured beans in a pot, then tipping the beans out and counting them right before announcing the results.  This practice was used as recently as the time of the American colonies, when Pennsylvanians commonly voted by tossing beans into a hat, and it seems like an appropriate metaphor for this match, in which brown pinto beans were against white kidney beans.

FUN FACT:  The only time Canada had been at a (men’s) World Cup was in 1986, when Mexico last hosted the event; the two countries won the bid to co-host the Cup in 2026, along with the USA.  This time around, Canada is back in the World Cup arena, in group F.  Their first match is against Belgium, on November 23.  Which country would get your vote?  Let’s say the match is Canadian Poutine (fresh-cut French fries topped with cheese curds and gravy, first appearing in the province of Quebec in the 1950s) vs Belgian Frites with Andalouse Sauce (fresh-cut French fries, served with seasoned mayonnaise).  I am a French-fry lover, so either of them could win my vote, perhaps I will go with a tie Canada 1-Belgium 1.

7 thoughts on “Mexico vs Poland – Time to Spill the Beans”