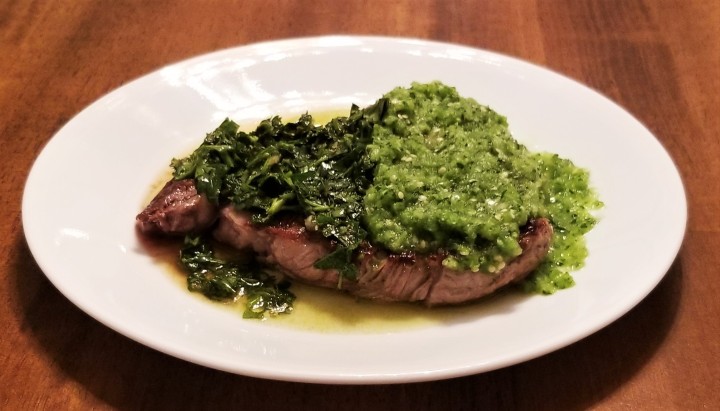 The FIFA World Cup 2022 continues, as some unexpected outcomes have been witnessed, such as Germany losing 1-2 against Japan, or in group C, the defeat of powerful Argentina by Saudi Arabia 1-2.  In the same group, the match Mexico vs Poland ended with no goals, and now group C has an interesting early ranking: Saudi Arabia at the top with 3 points, Mexico and Poland tied in second with 1 point each, and Argentina at the bottom with 0 points.

For Mexico’s games during the first phase of the cup, I have tried to find dishes from each opponent, with similar ingredients as a traditional Mexican dish; I then prepared one batch of each, and they were tested by my family, next to each other.  From the results of the culinary match, I am making predictions for the outcome of the corresponding soccer game.  In my previous post, Mexico’s “Horseman Style Beans” won over Poland’s “Beans a la Brittany” by a good margin, and so I predicted the score Mexico 4 – Poland 3; the actual final score was 0 – 0.

Next, Mexico will be playing against Argentina.  Moving on to greener pastures, the inspiration for this culinary match came from some of the last produce harvested in my backyard – bright emerald parsley, green tomatillos in their cute husks, and hot serrano peppers (also pictured, cherry tomatoes and jalapeño peppers, not used for this post):

A short musing pointed to a battle of raw green sauces:  the parsley was used in Argentina’s iconic Chimichurri, which takes advantage of the fresh herb, and for Mexico, a flavourful raw salsa verde.

Each Argentine will say that this sauce should (or should not) have oil or other ingredients, and to bring out the spice flavours, recommend grinding in a mortar, adding hot water, or even frying; they will also provide with their own set of proportions for the rest of the ingredients.  My recipe includes elements common to most recipes I reviewed.  I chose to use hot water, and I definitely kept the oil, which brings everything together; keeping the flavour mild by using sunflower oil (or a mix with a little olive oil) allows the rest of the flavours to meld and shine in perfect balance.  The amounts are then simply a guide, and each cook may, of course, doctor them to their personal taste.

Place paprika, black pepper, ají, and salt in a bowl; crumble oregano on top, then add hot water and mix.  Peel garlic and mince, adding to the bowl:

Incorporate reserved parsley, along with the wine vinegar, and mix:

Finally, trickle oil over the mix, and stir to incorporate all the ingredients:

Leftovers will keep well in a jar in the fridge for a couple of weeks.

I have used this sauce in several of my posts, a staple and classic sauce at the Mexican table.  The traditional way is to process the ingredients in a Mexican mortar (molcajete) but in most modern kitchens, using a blender is the norm.

Adding a touch of lime juice is optional, depending on the acidity of the tomatillos; this batch was nice and green, so the tomatillos were just sour enough:

First pulse a few times to crush the veggies, stopping to scrape the jar wall with a spatula:

Continue blending until desired texture is achieved.  I made this batch of salsa verde on the smooth side:

Transfer to a bowl, add lime juice (if needed), adjust seasoning with more salt, to taste, and serve immediately:

Any leftovers will keep in a jar in the fridge for one or two days, but flavours will quickly change, becoming bitter.   An option is to cook leftovers in a pot for a few minutes, a better-known version of salsa verde that once cooled down, will keep well in the fridge for about a week or so.

These versatile sauces are used to condiment patties, sandwiches and meat, amongst many other things.  For the first two, I would have to cook specific Argentinian empanadas or choripán to go against Mexican quesadillas or tortas, respectively.  I opted for a good grilled steak, instead, which can serve as a neutral canvas for both sauces:

Next to each other, the two green sauces looked very appetizing:

On the photo below, left, chimichurri and steak, a deliciously pungent bite, with lasting hot and strong notes from the spices.  On the right, the flavourful and spicy raw salsa verde, coating the steak with a refreshing taste:

Three testers tried the sauces side by side.  Results of the culinary match:  I had an inkling that this was going to be a polarized trial.  Tester 1 declared the Mexican raw salsa verde the absolute winner.  Tester 2 chose the Argentinian chimichurri as the leader without hesitation, then proceeded to eat it all up like there was no tomorrow.  Finally, tester 3 just could not pick one, thinking that they were both delicious.  Total scores:  Argentina 1.5 votes vs Mexico 1.5 votes.

For my guess for the soccer match, I am going to have to declare a tie then, with a low score, Argentina 1 – Mexico 1.   The match will take place on November 26, 2022, starting at 2:00 pm Eastern Time.  Please feel free to comment and give your own predictions on what you think will be the result of this or any other game of your interest.

And about Canada:  The only time Canada had been at a (men’s) World Cup was in 1986, when Mexico last hosted the event; the two countries won the bid to co-host the Cup in 2026, along with the USA.  This time around, Canada is back in the World Cup arena, in group F.  Their first match was against Belgium, and I proposed a match between Canadian Poutine and Belgian Frites with Andalouse sauce, predicting a tie Canada 1-Belgium 1.  The actual score was Canada 0 – Belgium 1.  In spite of the loss, post-game coverage generally praised the Canadian team for their skill and technique; the result places them in a somewhat dangerous position, with not much margin for error left for qualification into the next round.

Canada’s second match is against Croatia, on November 27, 2022.  Which country would get your vote?  Let’s say the culinary match is between Canadian Seafood Chowder (a fish and seafood stew with potatoes in a creamy sauce, traditional in the Atlantic provinces) vs Croatian Octopus Peka (octopus and potato stew, prepared in a metal pot with a domed top, covered with hot embers).  I loved the seafood chowder I prepared in my Canadian kitchen, and I have never tried Peka, so I am offering a one-sided guess of victory for Canada, with a score Canada 2 – Croatia 1.

6 thoughts on “Argentina vs Mexico – To Greener Pastures”