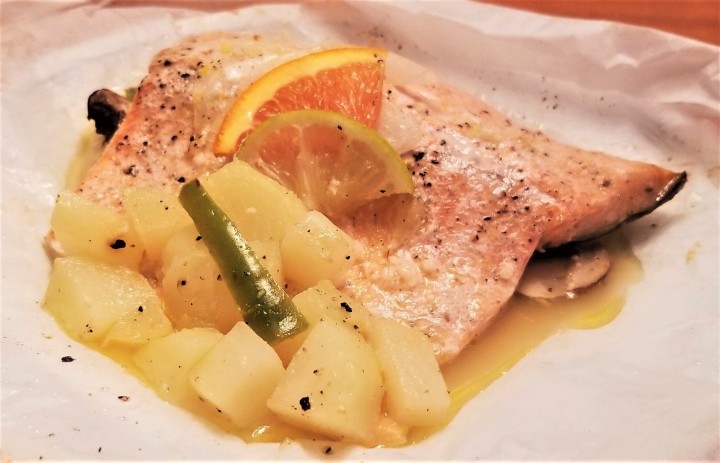 Spanish conqueror Hernán Cortés completed the overthrow of the Mexica (Aztec) Empire in 1521, and he was granted the title of Marquis of the Valley of Oaxaca, in 1529.  In 1532, he secured an extensive property in what is now the municipality of Cuajimalpa, part of Mexico City, as well as areas in the municipalities of Ocoyoacac, Huixquilucan and Lerma in neighbouring Estado de México; the Spanish crown granted the use of this land to his wife, Juana de Zúñiga, and she established an hacienda, which people called “the marquise’s territory” – “el territorio de la marquesa”, later shortened to “La Marquesa”, a name that remains popular to this day.  Over the centuries, a large part of “La Marquesa”, now a National Park of more than 1,760 hectares, has remained relatively undeveloped, comprising several valleys and evergreen forests, with small rivers and some of the structures from the original hacienda;  however, a few enterprises have been developed in the area, with freshwater trout farming being, by far, the most successful and best known of all.

Towards the end of the 19th Century, there was a global effort to introduce rainbow trout to inland habitats, or re-populate depleted bodies of water; in Mexico, around 1889, some specimens were brought and successfully introduced to the ranch of Chimaleapan, in Estado de México, and a few years later, a fisheries centre was established in nearby Almoloya del Río.  In 1943,  “El Zarco”, an aquaculture and education centre dedicated to Rainbow trout farming, was created in “La Marquesa”, with the original hacienda building housing their aquaculture school.  “El Zarco”  was the first aquaculture centre of its kind in the country, and Estado de México has been, for many years, the top producer of Rainbow trout in the country.

Many people visit “La Marquesa” for its natural beauty, with many opportunities for hiking, biking, horseback riding, and even fishing.  Scenes of family picnics and happy emotions from being with friends at “La Marquesa” are part of the memories for many people who grew up in Mexico City and nearby Toluca, as well as enjoying antojitos  (“little cravings”, snacks) at stands by the side of the road, or eating trucha (trout) in one of the many family restaurants around.  These restaurants always covet the freshest trout that is locally sourced, and cook it in many ways: grilled, pan-fried in garlic sauce (“al mojo de ajo”), or “empapelada”, which means “wrapped in paper”, although nowadays a lot of people use Aluminium foil, especially at restaurants.  I believe this is probably for convenience and lower cost, and also because, once the trout is wrapped into packets, these are often cooked with direct heat over a grill, in which case using paper would be dangerous, becoming a fire hazard.  Since my recipe calls for baking in the oven, either wrapping material may be used; I chose to try both, to compare results.

First, prepare all ingredients for the sauce and toppings:  Slice one lime and one orange in half, then some slices from each, for garnish.  Remove stem(s) and seeds from pepper(s) and slice into strips. Wipe mushrooms to remove dirt, and slice.  Place minced garlic in a bowl.  Slice onion in half, then into thin slices:

Squeeze juice from halved citrus fruits into the bowl with the garlic.  Add two tablespoons of olive oil, and half a teaspoon of salt, or to taste.  Mix thoroughly  with a fork or small whisker, and reserve this sauce.

Pat fish with a paper towel, gently removing any leftover scales or bones.  Slice each fillet into two pieces of roughly equal weight (tail-end piece slightly longer); set aside, along with the cubed potatoes.

I started with a piece of foil.  Fold one rectangle in half, shiny side in, so it forms a square.  Open like a book, with the fold parallel to the edge of the working surface:

Brush the centre of the square on the working surface with a little oil.  Reserve some of the sliced onions and peppers for garnishing, then place one quarter of the rest on the greased spot on the foil, along with a quarter of the sliced mushrooms (photo below, left); pour one teaspoon of sauce over the veggies.  Place one piece of fish on top of the veggies, skin side down (optional: for tail-end pieces, tuck the narrow tip in, for a more uniform thickness); garnish top with some reserved onions, and one or two pieces of orange and lime slices.  Place one quarter of the potatoes and a piece of reserved pepper next to the fish, near the fold (photo below, right):

Season with salt and black pepper (preferably freshly ground), to taste; pour about two tablespoons of sauce uniformly over the fish and potatoes:

Fold edges a second time, pressing down, to seal packet.  It should look roughly like a square, with room for the steam that will form during baking:

Place packet on a baking tray, and repeat with the rest of the ingredients.

For the parchment paper wraps, fold square twice to form a four-layer square, then unfold and place on working surface.  The food will be placed at the centre of the top half of the paper (in the photo below, see arrows marking the folds).  Brush with a little oil, and proceed to assemble the fish and potatoes as with the foil:

To close this packet, bring empty half of the paper over the food, to form a long horizontal rectangle, folding the top edges together (photo below, left).  Roll a short end of the rectangle towards the centre, then tuck under the packet; repeat with the other side, to form an approximate square packet (photo below, right):

The packets should be arranged in a single layer on the baking tray:

Bake in the middle of the pre-heated oven for 20 minutes.  In the photo below, one packet of each kind, after baking:

Serve hot as shown above, so diners may open their meal like a neat parcel, taking advantage of all the sealed flavours and sauce.  This is how they looked, once opened:

My husband and I shared the two packets, to compare side to side.  The flesh was equally moist, and flaky, but still firm and with the characteristic nice and “meaty” texture of properly cooked trout.  The skin was not crispy, but had a pleasant bite and great flavour.  The potatoes and veggies were equally delicious for both.  As for differences, the fish from the paper packet looked slightly browned, and the sauce seemed thicker; this is what determined the final judgement to favour the paper packet, because that extra layer of flavour from the browning took the fish to a different level, and the thicker sauce made for a better melding of the delicious citrus juices with the oil and garlic.  I thought of sort of an equivalent of pressure vs slow cooking, with the foil packet probably having a tighter seal, as in a pressure cooker, while some steam may escape from the paper packet, as in a slow cooker, reducing the water content, and hence allowing some browning of the fish, and thickening of the sauce:

A sprinkle of fresh lime juice at the table was a really good finishing touch.  The only regret from my husband was not having more mushrooms and orange slices, so the ingredient list above and in the printable recipe includes double the original amount of sliced mushrooms, and calls for “1 or 2 oranges” so the second may be all used up sliced, to garnish the fish before closing the packets.

The official name of “La Marquesa” is “Parque Nacional Insurgente Miguel Hidalgo y Costilla” – “Insurgent Miguel Hidalgo y Costilla National Park”.- Miguel Hidalgo y Costilla was a Catholic priest during the last years of the Spanish colonial times; he was part of a group planning the insurrection against colonial rule.  After being discovered, he initiated the Mexican Independence War as he first exhorted the people to fight, in the town of Dolores on September15, 1810.  As the insurgent army advanced towards Mexico City, acquiring more recruits as they approached, the loyalist army was waiting for them at the nearby “Monte de las Cruces” – Mount of the Crosses; although with great losses, the insurgents were victorious.  The battle site is located within “La Marquesa”, so when the area was declared a National park, it was named in remembrance of that battle, and in honour of Hidalgo’s victory.

The first blown glass factory in Latin America was established on “La Marquesa” grounds .-  Opening in the 1850s, this factory produced bottles for a local beer company in the city of Toluca, as well as, later on, for soft drink emporium Mundet™ (founded in 1902).

I am bringing my recipe to Full Plate Thursday #529 with Miz Helen @ Miz Helen’s Country Cottage.

I am also sharing this recipe at Fiesta Friday #373 with Angie @ Fiesta Friday, co-hosting this week with Diann @ Of Goats & Greens.

I am joining What’s for Dinner? Sunday Link-Up #308 with Helen @ The Lazy Gastronome.

I am sharing my recipe at Over the Moon #270, graciously hosted by Bev @ Eclectic Red Barn, and Marilyn @ Marilyn’s Treats.  Special thanks to Bev for featuring my Cajeta Jello and Apple bunny post at her party.